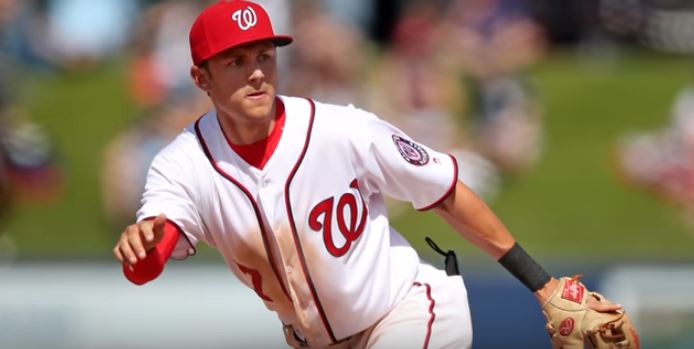 Pitchers Josh Hader of Milwaukee and Sean Newcomb of Atlanta, and Washington shortstop Trea Turner (appearing in above photo) are all doing the perp walk after it came to light that, as teens, they posted offensive tweets about blacks and homosexuals. MLB has ordered Hader to sensitivity training.

“I still feel that he’s an amazing pitcher, but the things he said were inexcusable. None of us know if he’s really changed since then. I felt it was important for people to see the tweets and make their own judgment.”

Whack's journalistic wheels fell off when she then posted a Twitter quote from an unknown source who goes by "@NatsSquid," saying:

“Baseball culture is toxic and I want players to be held accountable for what they say.

“There is deeply rooted racism in baseball as well as homophobia and sexism. I would like baseball culture to change and be more accepting for everyone.”

If "Anonymous" tweets it, it must be true.

Nightengale has been an MLB writer for 32 years. Here's the transcript of his two-minute video on USA Today condeming the players and demanding action by MLB:

"Huge, huge black eye for the sport. Already fighting racial stereoptypes, as it is you know. There's only 7 percent African-American population in baseball. Baseball's been considered a little bit of a racist sport in nature. When you see this type of thing and it's like man who wants to be in that sport? Really gives a horrible image.
"It shouldn't be enough to apologize and say "oh yeah I was just young." You weren't four years old, you weren't six years old, you were still a young adult expressing these views. And just because you don't do it on social media now, what are you doing with all your knucklehead buddies behind closed doors saying to the friends and family?
"I hope people don't forget that and I hope that stigma lives with those guys forever, and baseball better do something about it. How are you going to get young African-Americans to play baseball when you can say yeah 'look at your sport it's full of racism. These guys are tweeting stuff. Why do I want to get involved with that? I'm going to go to another sport.
"No that's the sad thing, it doesn't shock you. Does it surprise you that it's on a guy's Twitter account? Yes. Racism (in baseball) used to be so much more overt. If you were white, you could be a bench player. If you were black you had to be a superstar. Front offices, managers, on and on. And now you don't hear about it that much because people are being more quiet about it. Then this comes up and you wonder 'man has things changed that much in the last 30 years? Or are just people being quiet about it?'
"Back in 1988 when Al Campanis of the Dodgers came out, he was the general manager, and said African-Americans don't have the qualities to be managers, GMs, what have you. America was outraged. But it was good for the sport because all of a sudden it woke people up and saying 'that's right, how come these guys aren't getting hired? what's going on here?' So maybe now that this has popped up again, it's a wake-up call to every team. To the owners, let's start having some programs in spring training to start, you know, educating people. I think things have slipped away a little bit and people didn't realize what's going on and now it's reared it's ugly head again."

Three of MLB's 750 players have racially tinged skeletons in their Twitter closets, so now MLB must whirl into action. Sensitivity training assignments have been made, programs must be initiated and everyone must look deep inside to find that inner racist. That's the progressive media way.