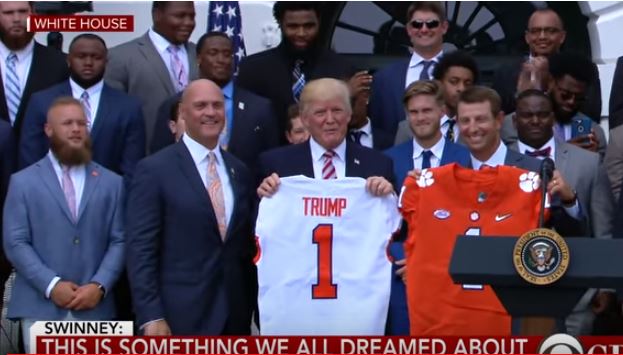 The Super Bowl champion Philadelphia Eagles will celebrate their NFL title during a June 5 visit with President Donald Trump. These visits were seen by media as joyous occasions when Democrats, like sports junkie Barack Obama, were in office. But now they view the visits as something like a road game before a hostile audience for the teams coming to Washington.

"Now that the Eagles are in the process of working out a visit to the White House after some doubt as to whether it would happen at all, we can resume fighting about it," Orr writes. "Should these kinds of things be mandatory for everyone or should they happen at all? Do we even care about the players who are talking about why they’re staying away?"

A comparison of the attitudes of the media based on whom the championship teams are visiting is a tale of double standards. Orr said Republican President Ronald Reagan turned the events into "a song and dance." Trump has turned it to a negative:

"But the current president has drawn out a backlash among athletes (and the general public) that has obscured the pomp and circumstance to a level that makes having the current photo opportunity and rubber chicken dinner monologue in the rose garden seem a little tone deaf, even if there are many players and coaches who still relish the opportunity and enjoy the access.

"It begs the question: Is there a better use of everyone’s time?" Orr would like to see the president "in a room with the athletes who represent well the diverse ideas and backgrounds of the nation he governs."

The current setup, Orr writes, is disingenuous because "a player's heartfelt concerns" are not addressed during the speedy 15-minute meet and greet. The one team that has the right idea about the whole thing is the NBA champion Warriors, who feuded with the president and did not go to the White House. Orr writes.

"The Warriors seemed to have the only solution that made universal sense, and at least some Eagles seem to be following suit, planning to turn the day off into something positive elsewhere. Maybe the logical end to the White House visit really is upon us, but if that could lead to the birth of Post Championship Community Service Day, that's a victory everyone could celebrate."

Now compare past media coverage of champions' visits to the Obama White House:

CBS Sports' Dayn Perry in 2015 when the San Francisco Giants visited the Democrat: "And a fine time was had by all!"

David Smith, The Guardian: "Hosting America’s champion sports teams offered some light relief for Obama from the burdens of office. He welcomed the Warriors to the ornate east room, watched over by portraits of George Washington and Theodore Roosevelt, where recent public events have included a press conference with the French president after the Paris attacks and a tearful speech about gun control. On Thursday, however, there was jollity. The most powerful man in the world hopped up and down on the spot in an impression of reigning most valuable player Steph Curry celebrating victory over the Washington Wizards."

Serena Marshall, ABC News: "The Golden Warriors are now taking to social media to show off their excitement with some tweets and videos."

Tim Daniels, Bleacher Report: "The reigning MLB champion Kansas City Royals will hope a visit Thursday to the White House with President Barack Obama to celebrate their 2015 World Series triumph can provide the spark they've been looking for heading into the final months of the regular season."

Then that upbeat mood darkened as it got closer to Trump's time as president:

Cindy Boren and Marissa Payne, The Washington Post, when the Cleveland Cavaliers visited Obama in November 2016: "The scene was light given the seriousness of the other guest Obama welcomed to the White House earlier in the day. President-elect Donald Trump and Obama met in the Oval Office for the first time to begin the transition that will end when Trump is sworn into office on Jan. 20."