The Root: Kaepernick is 'Embodiment of Slaves Who Jumped Off Slave Ships' 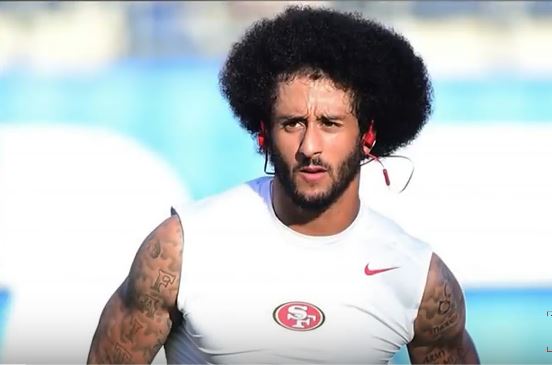 To The Root's Senior Editor Stephen Crockett Jr., the notorious ex-football player Colin Kaepernick is "our king" and a man who walks it, talks it. "His majesty" Kaepernick is also the embodiment of slaves who jumped off slave ships to their death, and he's the man who now shows up at depositions of the NFL owners he accuses of colluding to keep him out of the league wearing a Kunta Kinte t-shirt.

In other words, Crockett is assuring us that Kaepernick won't be around again to disgrace the national anthem during the 2018 football season. Or any other NFL season. Ever.

Crockett labels Kaepernick a "negus" -- an Ethiopian word for "king" and "ruler." And he notes Kap is the "realist negus alive." Above a photo of the king, Crockett does the literary version of kneeling to royalty, writing: "Seriously, look at this gloriousness below."

It may have been Barack Obama who reigned from 2008-2016 as America's "blackest man." But since 2017, the "undisputed winner" of that title is King Colin, writes Crockett. "It didn’t hurt that during this time, Kaepernick emancipated his hair from the bondage of cornrows to unleash an Afro crown that made Angela Davis call him for hair-care advice." That's Angela Davis of Communist Party fame, former member of J. Edgar Hoover's 10 Most Wanted List and now a radical professor emerita at the University of California, Santa Cruz. That's especially low company for a king.

Kaepernick is "a throwback to the era when men like Malcolm X would put their foot in a person’s ass for coming at them wrong. This is our king," Crockett gushes. He's also:

"(L)iterally the walking spirit of all those slaves who said 'F--- this boat' and jumped to their deaths, my n***a showed up to Bob McNair’s deposition ... wearing a KUNTA KINTE T-shirt!"

McNair is one of the many NFL owners who, in a time of their team's need at the quarterback position, declined to give King Kap the time of day. The angry king fought back by suing the owners for collusion. McNair is the owner of the Houston Texan, who complained last year of the anthem protests that the "inmates are running the prison." Crockett and other media suck-ups to Kaepernick remind us of this quote at every opportunity.

"Ruler" of the world of unemployed pro football players, Kaepernick was spotted working out in McNair's city recently and Crockett said he had an agenda. "It turns out that our hero was preparing to face the evil villain ... namely, Houston Texans owner Bob McNair," a man so vile, so racist "that his bastard ass would’ve been fine fielding an all-white team, according to Jerome Solomon of the Houston Chronicle."

McNair was the first owner to be deposed for Kaepernick’s collusion grievance. Unofficial judge and jury member Crockett has already delivered his "verdict," declaring the "racist motherf-----s" guilty.

The Root's senior editor predicts Kaepernick will attend all of the NFL owner depositions "because this is what a stand-up black man looks like. Plus, a doctor once told me that white people get nervous when they have to look into the eyes of black people. It was Dr. Dre, but still."

As a loyal subject of the most high king, Crockett described Kaepernick's actions as ...

"(W)hat it looks like when you want off the plantation at all costs. This is why Kunta Kinte was willing to take lashes to his back to be called by his birth name. Sometimes kneeling is the best way to stand for something, and all the owners who’ve been hiding their racism behind a veil of mediocre, washed-up white quarterbacks now have an opportunity to deny it, but Kaepernick’s going to be there wearing his full Afro like a crown, and I’m willing to bet they won’t say it to his face."

The king may be adding a prince to his royal "family" soon. Because the New York Post's Mark Sanchez writes today that "NFL Players are Getting Anxious over the Next Kaepernick." The best candidate so far is Eric Reid, another former San Francisco 49er who took a knee throughout the 2016 and 2017 seasons. In fact, Reid was the first to join King Kap's disrespectful movement of kneeling during the national anthem.

Sanchez wrote, "The silence around Eric Reid is growing louder. While the NFL offseason is fairly young, the one-time Pro Bowl safety is still on the market and still not getting sniffs from teams, as the possibility that the NFL has another Colin Kaepernick on its hands becomes more and more of a reality." Richard Sherman, the former Seahawk and now a member of the 49ers, says Reid has cause for "legal action."

Let the kneelers sue to their hearts' content, but if they never get another chance to disgrace the nation again, so be it.