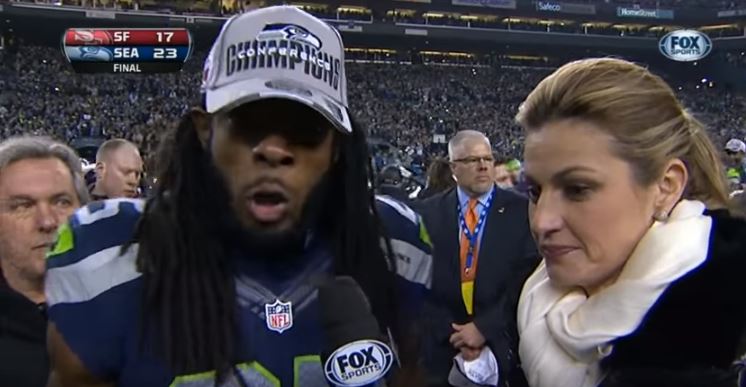 By saying adios to two of the most woke players in the National Football League the Seattle Seahawks just got quieter and the New York Daily News just got louder. Daily News race-baiter Carron J. Phillips wants his readers to believe that by unloading Michael Bennett and Richard Sherman the Seahawks are the latest example of America's fear of woke athletes.

"I have a sense those feelings circulated throughout the Seattle Seahawks' front office last week, as they got rid of two of their best players who just also happened to be their two 'wokest' ones.

"According to reports, in an effort to make their team a 'little quieter,' the Seahawks traded defensive lineman Michael Bennett to the Philadelphia Eagles and released cornerback Richard Sherman."

Sherman (ranting to Fox Sports' Erin Andrews in photo above) has been one of the loudest voices criticizing NFL Commissioner Roger Goodell and addressing race relations and player protests, Phillips notes. Of Bennett, Phillips says he was right there "when it came time to kneel or stay seated during the height of the anthem protest. Bennett also claimed he was racially targeted by Las Vegas police last year because he's an African-American man who was" in the wrong place at the wrong time." Despite all the noise around him, Phillips says, Bennett was one of the best defensive lineman in the NFL.

Phillips is disappointed that the Seahawks aren't as accepting of social justice warriors as are the NFL champion Philadelphia Eagles and the NBA champion Golden State Warriors. The Eagles have Harold Jenkins and Chris long, loud and woke. The Warriors have Coach Steve Kerr, Steph Curry and more.

"And last December, I wrote about how the Warriors are the wokest team in sports due to their front office and head coach encouraging their star players to use their platforms to address social issues and affect change," Phillips raved.

Done belittling Seattle, Phillips trashed FOX Sports host Colin Cowherd as one who's still asleep. Cowherd said the Seahawks are the most tolerant, progressive team, but they're admitting, "The whole political thing in the locker room did not work." (That begs the question how does a coach draw up political plays that win championships?) To which Phillips says how soon we forget the Eagles and Warriors.

Phillips says Cowherd's comments that NFL teams being overly concerned about UCLA quarterback Josh Rosen's political noise are eye opening. "Translation: The NFL is terrified of a woke white guy not only being a quarterback but the face of a franchise.

"Like I said, fear is a helluva motivator," Phillips groaned. It's a fear of athletes lacking the "right stuff," which Phillips loathes:

"It's that same fear that has NFL teams in need of a quarterback having second thoughts about a top prospect because they don't think he has the same work ethic because he isn't poor, questions authority, and may not believe in God."

Furthermore, Laura Ingraham's motivation for telling LeBron James to "shut up and dribble" was her fear of "the positive effect he has on this country. And the NFL is scared of any athlete, despite their race, who can't be controlled." Phillips is not only woke; he's also paranoid!

Phillips concluded that "so many people in this country fear woke athletes. Because they know that they have the ability to wake the rest of the country up." Fear? More like dismissing, as in fans who have written off the NFL, the NBA and left-stream media due to liberal, disrespectful behavior by athletes.