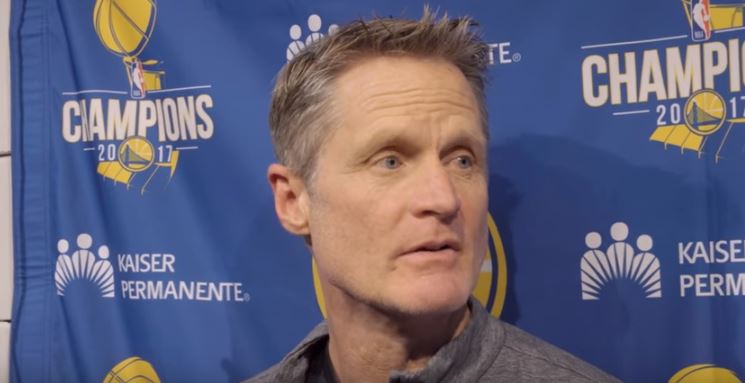 Coach and writer agree that the youth might be the people who accomplish the liberal pipedream of gun control:

"Last week Kerr was blunt in blaming the government for inactivity on gun control that inevitably leads to massacre after massacre. Yesterday, in the wake of the students of Marjory Stoneman Douglas getting engaged with protest and with politicians, Kerr said the teens are our best hope."

Prompted by an off-camera and unidentified interviewer who complains that there is never any progress on gun control, Kerr said the protesting students are heroes who will change the culture:

“I think it’s phenomenal. What those kids are doing is heroic. It’s heartfelt. And I think it’s the beginning of some change. I really believe that. I’m amazed any time I see them on TV or online. It’s heartbreaking, but inspiring all at once."

What these "heartfelt" students are advocating is unconstitutional. Not that liberals really care about the Bill of Rights. To libs, it's all about emotions and now it's also about the children. Kerr feels "very encouraged" because, "We’ve got a generation that’s grown up with these school shootings and mass shootings and they’re fed up."

Kerr believes these heartfelt young people, many of whom cut classes in their schools to march, are following in the footsteps of those who protested the Vietnam War and the old white guys behind it:

“Historically, it’s the young generation that has to initiate change. You think about the Vietnam War. All the old white guys who kept sending the troops off to fight this ridiculous war. And all the young people who protested had to make change, create change. And so it’s the young people in the county now who are going to create the change we need in terms of how we handle gun violence, and how we do our best to curb it. It’s amazing to watch them.”

Petchesky isn't one to disagree with a good lib like Coach Kerr and he sees young gun control marchers occupying the high moral ground:

"The teens have been excellent and more cogent in their arguments—and their interrogations—than most politicians and reporters. As happens with every generation, young people are as a whole, morally on the right side, and they haven’t been conditioned to accept the shitty things about the world as unchangeable. Let’s do our best not to crush them before they make the world better."

Children are amazing, brilliant and incredibly useful to the media when they support the positions favored by the Left.