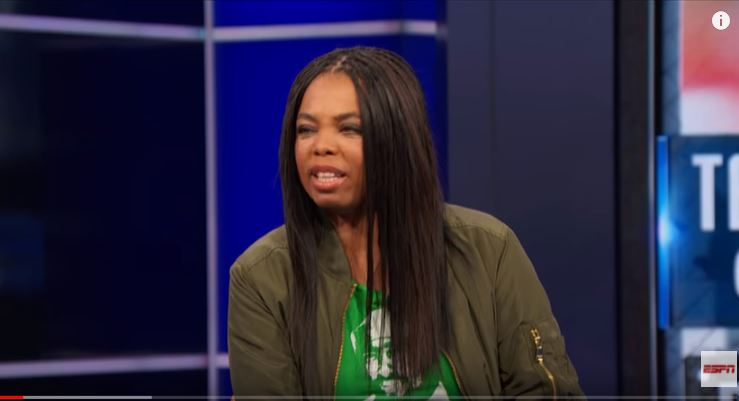 It's only fitting that Jemele Hill is leaving ESPN and Bristol, Connecticut for its black culture blog, The Undefeated, located in the nerve center of American politics -- Washington, D.C. The Washington Post's Matt Bonesteel and Jake Russell reported the former Sports Center co-anchor will “write about the intersection of sports and politics when applicable.” We can expect her to park in that intersection often and loudly.

Hill's time on Sports Center lasted less than a year and was a train wreck from the beginning. ESPN tried to re-create Sports Center into some new whizbang thing that never registered with the viewing public. Hill and her co-host Michael Smith have huge racial chips on their shoulders, which prompted her to tweet in September:

Hill wiggled out of a suspension for that. But, continuing to play with fire, she did draw a suspension shortly after that for recommending advertisers boycott the Cowboys because owner Jerry Jones said his players had to stand for the national anthem or take a seat on the bench. Some of the same organizations advertise on ESPN. Talk about putting your foot in your social media mouth!

Even after the suspension a defiant Hill further turned off viewers with more dumb comments:

Some media predicted Hill's days on the ESPN Sports Center desk were numbered after those blunders. And since that came to pass yesterday, now come the excuses and the posturing.

In an ESPN news release, Senior Vice President Rob King said this: “While Jemele’s unique array of gifts as a journalist, storyteller and critical thinker has already enriched The Undefeated on a number of occasions, today is an exciting day. We can’t wait to see all of the new ways in which she brings her experience and perspective to all of our platforms.” Neither can the Democrats wait for her one-sided commentary.

The Post reporters defended Hill's Sports Center failure by claiming it "occupies a tricky spot on ESPN’s schedule, as the events of the previous night are old news while that day’s games usually have yet to be played. So a by-the-book highlight show clearly is not a good use of that time, and that’s where the idea for a more persona-driven edition of 'SportsCenter' hosted by Hill and Smith came to fruition in February (2017)."

Hill wanted to return to commentary, her previous role. Sports Center "really wasn’t my calling.” No kidding! So she talked to higher-ups about a reassignment, and now she can go full tilt on Trump or anyone else in the political arena. Hill followed up Friday's announcement with a long tweet including these remarks:

"I asked to leave the show -- some of y'all probably need to read that sentence again -- because of a strong desire to return to reporting, writing and commentary."

Hill said she wasn't sure if she had the shortest run in Sports Center history, but it was definitely the dumbest and one of the most political. She'll fit right in with a whole nest full of liberal race-baiters at The Undefeated.