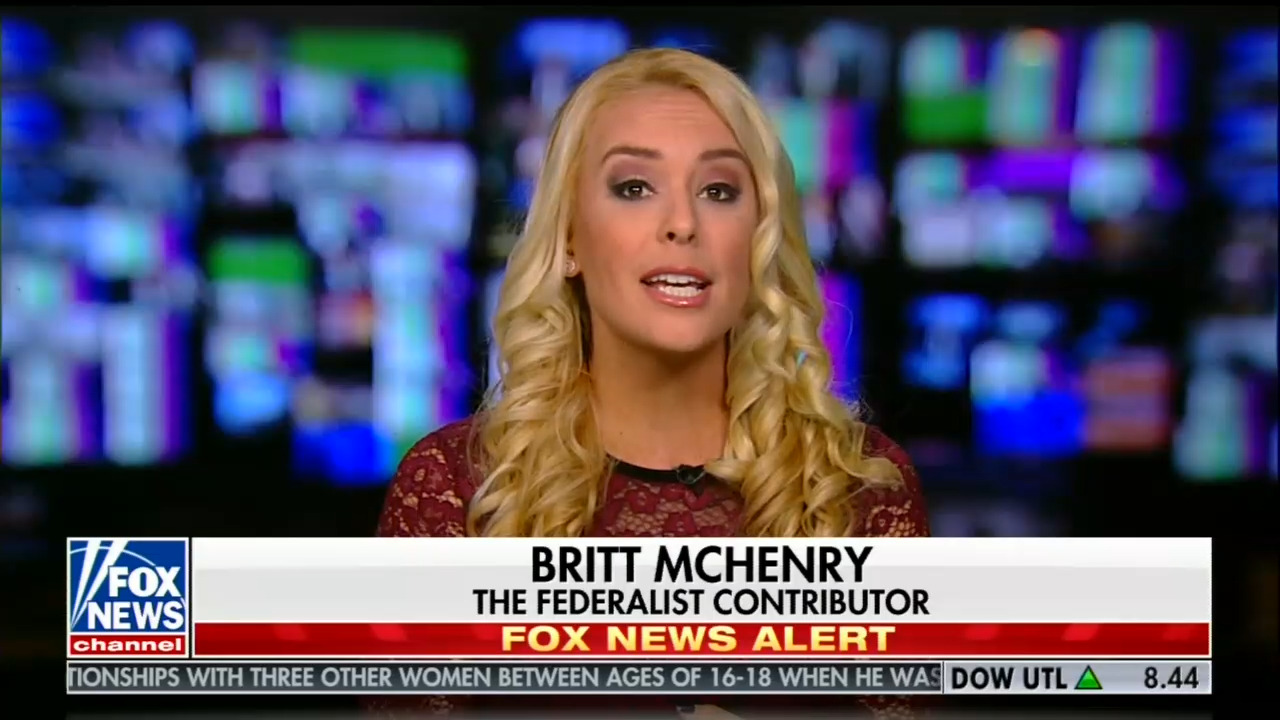 Conservative and former ESPN reporter Britt McHenry has dared to criticize Colin Kaepernick, a sacred cow and darling icon of the Far Left, bringing down the wrath of "media Khan" upon herself. After she ripped GQ magazine for selecting the unwanted football free agent as "citizen of the year," left-stream media lost it and began hurling outrageous insults her way.

Hannah Parry, of the Daily Mail, reported, "McHenry claimed that there were many more worthwhile football players than Kaepernick who sparked a national protest when he began kneeling during the national anthem last season to protest racial inequality and police brutality."

On the subject of Kaepernick, McHenry tweeted:

JJ Watt raised $37 million for Hurricane Harvey victims. 37 MILLION! But Kaepernick refused to stand for our national anthem (a year ago) and is Citizen of the Year. Right…'

For those who think I don't get the reason for protest you're wrong. Eagles Malcolm Jenkins met with lawmakers to help community. Dolphins Kenny Stills met with Miami police. More examples of Citizen of the Year.

Additionally, McHenry complained: "Wear socks depicting police officers as pigs; wear Fidel Castro as a fashion statement IN MIAMI; sue NFL for collusion when gf compares owners to slave owners… Win Citizen of the Year,' she wrote. 'Serve in the US Military...nothing. What a joke, GQ. #Kaepernick.'

Outraged media drew their literary swords and denounced McHenry with vigor and venom. Check out the poison pen from Linda Stasi of The New York Daily News:

Britt McHenry, a right-wing sports reporter and infamous hater of everyday working people, used and abused the honor bestowed upon Colin Kaepernick, a true heroic modern-day civil rights fighter, by pulling a publicity stunt, which may solidify her chances of a permanent gig on Fox News.

And hey -- what woman wouldn't want to solidify her creds as a hater while shaming herself publicly, which in turn could lead to a permanent contributor gig at Fox News, the network that has shamed women for decades?

For her latest publicity stunt, McHenry lashed out at GQ Magazine for naming Kaepernick "Citizen of the Year" for taking a knee.

Yeah, we can't wait to take our civil rights opinions from the whitest woman on the planet instead of taking a hint from a man who knows both sides because he came from a mixed race family and was willing to put his career on the line to protest police brutality against black people.

Also, try stomaching this bile from The Root's Anne Branigin, whose description reads: "news fellow and self-identified hater with a heart of gold":

We told you Monday that many a wypipo [urban slang for "white people"] was big mad over Colin Kaepernick’s selection as GQ’s Citizen of the Year for 2017, but arguably no one was saltier than ex-ESPN reporter and tow truck victims’ advocate Britt McHenry.

But she didn’t leave it at that. Naturally, McHenry had the perfect white alternative to Kaepernick: the Houston Texans’ J.J. Watt. “JJ Watt raised $37 million for Hurricane Harvey victims,” McHenry wrote.

King Becky was so salty (and so thirsty for those racist retweets), she pinned that particular million-dollar thought to her page.

Meanwhile, race baiter J.R. Gamble of The Shadow League bared his fangs, too:

The resistance he receives is blatantly laced in stubbornness, racism and a disregard for people of color. Kaepernick has been blamed for all of the NFL’s problems by conservatives such as McHenry, who want nothing more than to discredit him and his actions over the past year.

By winning awards like the one bestowed upon him by GQ, Kaepernick is on the right side of history.

Several media attacked McHenry for having berated a person for towing her car away in the past (as if that had anything to do with the GQ controversy). They also trotted out the litany of all the organizations Kaepernick is supporting financially, but not one mentioned the gift he gave to the Center for Reproductive Rights to commit abortions. GQ and other media also insist on this crazy notion that he remains silent through all the turmoil he generated.

But NewsBusters' Matt Philbin exposed that ruse yesterday by documenting the "citizen of the year's" actions-speak-louder-than-words money grab collusion charge against the NFL. And let's not forget the Fourth of July denunciation of American independence from the safe distance of Kapster's Ghana "homeland."

GQ dropped the limbo stick of good citizenship to a new low, and McHenry incensed media lefties by hitting where it hurts -- the truth.