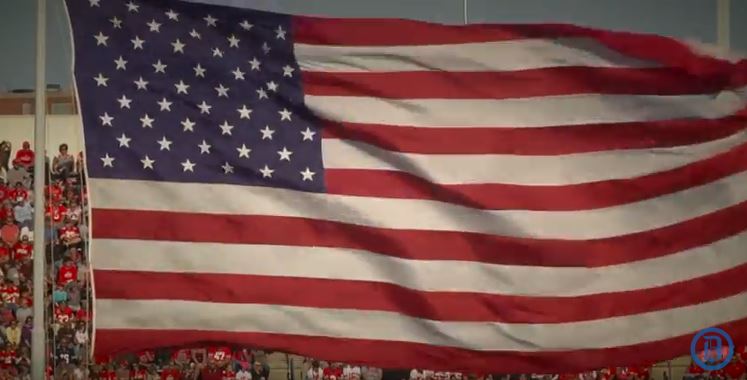 With athletes, cheerleaders and singers across the nation now commonly dissing Old Glory, The Chicago Tribune suggests it's not even appropriate for corporations to play the national anthem at sporting events. On The Town Editor Kevin Williams argues the Star Spangled Banner is getting the disrespect it deserves because it shouldn't be used at sporting events owned by private businesses.

In an editorial Williams wrote "if we didn't put the anthem where it doesn't belong, maybe people wouldn't use it in the wrong way."

But who gets to determine a right and wrong way or the proper time and place for the national anthem? Attaching the Star Spangled Banner to sporting events is a long and cherished tradition in this country. Sports fans obviously love the pre-game ceremony and see it as part of the ball park and American experiences.

With disgruntled leftists trashing that tradition, it only follows that, instead of finding fault with them, their media friends would try to justify this poor behavior. Williams' justification is to claim that playing the anthem at sports events is inappropriate.

The protesters obviously view the flag and national anthem as important enough to protest these ideals though. Take them away and where do their complaints go? To 60 Minutes and MSNBC where they should have gone in the first place.

Everybody is fighting over a few minutes of music but nobody is asking whether, in the context of the business of a corporate moneymaking enterprise, its use is appropriate. A role at a corporation isn't a source of national pride.

Why? Are we celebrating that we live in America? Then play the anthem before you make dinner, or when you wake up in the morning.

Does the place where you work play the national anthem before each day begins?

What if you're a Canadian playing in the National Hockey League? Do you have an obligation to stand if you are Czech or Russian? It isn't your anthem. You're just there for your job. An accounting firm playing the anthem at 8 a.m. has the same contextual viability as it does at before an NFL, NBA or MLB game.

The omnipresence of the anthem cheapens it. Its use should be reserved for special occasions, when national pride is at issue. Right now, the anthem is this thing that so many are using for their own purposes. Is wrapping something in the flag as a marketing ploy any more patriotic than taking a knee in protest?

I could not agree more with Williams' statement about people using the anthem for their own purposes. The Kaepernicksta's are using -- and abusing -- the banner for their own selfish, radical, unpopular purposes. That's why the NFL product is taking it in the shorts and it's why the league's leadership finally realized it had to bring the madness to an end.

And speaking of national pride, there is an element of Americans on the far Left repeatedly telling us they have NO pride in this country, that they are ashamed of it. If it was left up to them, we would never hear the Star Spangled Banner at public events. We would never ever see the flag in public if they had their way.

Williams' whiny arguments must be soundly rejected. With editorials like his, is it any wonder the subscriptions of leftist rags like The Chicago Tribune are plummeting?