The Sporting News' Steele Writes NFL Protests Too Long on Unity, Too Short on Police Brutality 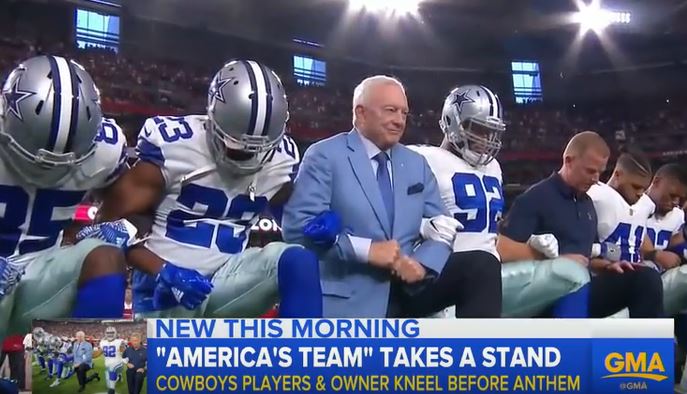 Last weekend's unparalleled level of protest around the NFL was not acceptable to David Steele, of The Sporting News. More than 100 players dishonored America by kneeling during the national anthem and many more players, along with some owners, stood and linked arms. Steele said these activities were too long on unity and too short on police brutality.

Steele, who is African-American, writes about the NFL and has co-written a book about former U.S. Olympic sprinter Tommie Smith. Along with fellow medal-winning sprinter John Carlos, Smith was sent home in disgrace for a black power salute on the victory stand in the 1968 Mexico City Olympic games. Back then, such a gesture was a national scandal. Now black power salutes and kneeling during the national anthem are vigorously defended by the left-stream media. But he remains unhappy that the weekend's eruption of activism did not go far enough:

The NFL and nearly every team spoke out this past weekend about President Donald Trump's foul-mouthed condemnation of its protesting players. Much has been said already about the overriding theme of these messages: unity.

What was missing from those statements, though, stands as a stark indictment of the relentless push of what the statements went to great lengths to include.

What was missing was the phrase "police brutality." Or any reference to it.

Steele writes that police brutality was at the core of Colin Kaepernick's activism last season. Two weeks before he first dishonored America during the playing of the national anthem, Kaepernick used his social media forum to express outrage over the deaths of Alton Sterling in Baton Rouge, La., and Philando Castile in Falcon Heights, Minn. Both deaths occurred in struggles with local police officers.

Police brutality is still Kaepernick's primary cause "as he toils without an NFL job," Steele writes. The topic is what generated support for Kaepernick from other Black NFL players. That's never been hidden or a secret, Steele continues.

But Steele is incensed that the NFL "hurdled" the subject of police brutality by dwelling too much on unity. He complained that 25 of the 32 NFL teams issued statements about unity. "Exactly two mentioned the police. One other made an oblique mention that might be about the police. None of them joined it with 'brutality,' or even 'abuse,' 'misconduct' or 'accountability.' The solidarity teams exhibited with their players in the face of the President's insults did not extend to the original object of their resistance."

Steele said the entire sport of football steered clear of the topic of police. "The day became about the President, the Constitution, patriotism, respect for authority … everything except the singular factor that drove Kaepernick to risk his career and reputation and forced the country to confront its priorities and values."

Even the Seahawks, among the league leaders in activism, "swerved to avoid" the subject of police brutality, Steele writes. Though Seattle's defensive end Michael Bennett was the victim last month of alleged police brutality in Las Vegas. It further irks Steele that the Seahawks chose to pre-empt the protest by remaining in the locker room during the playing of the national anthem before their game against Tennessee.

In doing so, they literally made the cause of confronting and eradicating police brutality disappear.

It was a microcosm of the NFL's stance. What they said wasn't as loud as what they did not say.

Speaking as a sports fan and a patriot, these outrageous pre-game displays are also too long on this word: disrespectful. And too short on this word: honor. No stadium PA announcer says, "Please kneel to dishonor America." They say, "Please stand to honor America." That's how it should be. Even if Jerry Jones, the showboating, attention-seeking owner of the Dallas Cowboys, kneels with protesting players.