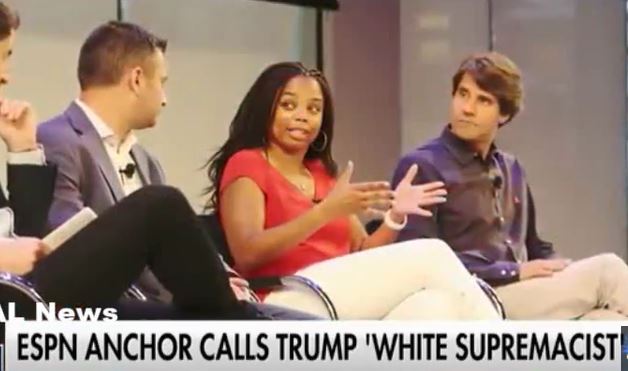 Many African-American sports media are now changing their avatars to the face of Jemele Hill to show support for the ESPN broadcaster who tweeted last week that President Trump and his supporters are "white supremacists." In a Sports Illustrated survey of Black media supporting Hill, Mike Freeman of The Bleacher Report was the most vehement in his disagreement with ESPN management that Hill crossed the line.

In a flurry of remarks lacking in factual basis, Freeman lashed out:

Really, to answer the question, you have to go down the Trump list. He launched a Muslim ban. He attacked Muslim Gold Star parents. He claimed an Indiana judge was Mexican and couldn't preside over his case. The Nixon Justice Department sued his company twice for not renting to blacks. He both-sided Nazis. He wouldn't denounce David Duke. He was the champion of birtherism. I mean, go down the list.

Not to mention the covers of the New Yorker and The Economist portrayed Trump as a white supremacist. These are all facts. They are all facts that can, and have, led many Americans and journalists to draw a conclusion about Trump. Jemele simply stated an opinion steeped in facts. How she would get into even a hint of trouble is stunning to me. It's indicative of how women in our business are held to a double standard and black women, well, holy s---. So I changed my avi because we are a country deeply rooted in symbolism. And to me she is a symbol of simple truth telling and honor. And I hope she doesn't change one bit.

Here, ladies and gentlemen is evidence incriminating the hysterical left-stream media as totally out of touch with the American people. Freeman quotes two biased left-stream media as references to try to prove his far-fetched claim that more than half the nation's voters are white supremacists.

If Freeman is to be believed, then Dr. Ben Carson, Trump's secretary of HUD, is a Black White supremacist! And Americans felt completely safe as former President Obama looked the other way while drug smugglers hauled "poison" across our border and he imported thousands of unvetted refugees from "Terrorist Central" nations.

On NBC's Today Show in 2000, Trump called Duke "a bigot, a racist, a problem. I mean, this is not exactly the people you want in your party.” Freeman is clearly to the Left of the leftists running ESPN and he has a big problem with stubborn things called "facts."

Among the other remarks about Hill collected from left-stream media by Sports Illustrated are these:

Jemele Hill has been an important voice on social issues at ESPN. ... She is committed. She is passionate about telling the truth in the face of hate on a daily basis. She should be supported and covered by ESPN colleagues and fellow journalists. On a daily basis.​

... I’m so infuriated that the highest office in the land would try to get a woman fired for stating what is so obvious and often admitted by people in the administration—that there are white supremacists in the White House.

If you look at Jemele’s comments, I don’t see any cheap shots here. What she said was fair.

We don't expect left-stream media to eat their own. We have long been conditioned to media lies and politically motivated positions, as seen above, on important issues. They have no filter to see things any other way. Race is the base, and the Left works overtime to cover its sorry record on that issue.