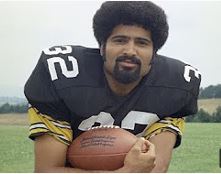 Here's a toast to you, Mean Joe Green and Jack Lambert. These two Pittsburgh Steelers' champions from the 1970s, would not have tolerated the un-American protests spawned by Colin Kaepernick. Their teammate, Franco Harris, told Mediate's John Ziegler so in a podcast interview this week.

Harris, the Hall of Fame running back, four-time Super Bowl champion and the man whose "immaculate reception" touchdown pass in 1972 enabled the Steelers to stun the Oakland Raiders in the AFC playoffs, said, “I don't think it would have been (head coach) Chuck (Noll). We had two of the meanest guys in football, who I think would’ve dealt with it that way, and that would’ve been Joe Greene and Jack Lambert.”

In a blog about the Harris interview, Mediate's Ken Meyer wrote that Kaepernick, who last played for the San Francisco 49ers in 2016, "is still a controversial figure in the sports world due to his refusal to stand for the Star Spangled Banner last season. Kaepernick said it was his way to protest racism and police brutality, though he still faces condemnation from critics who say he disrespected America as a whole by rebuking the national anthem."

Not surprisingly, considering his toxic brand, Kaepernick hasn't been allowed to step onto an NFL practice field this season. Nevertheless, he continues to talk trash through his angry tweets, ripping America as an oppressive nation and police officers as "pigs" and "slave patrol." Only a handful of copycat activists in the NFL are carrying out his bitter legacy of protest in his absence from the preseason.

When Ziegler asked Harris about the "B" word -- blackball -- Harris said America has social issues that need to be dealt with, but "it’s important to respect the country by standing before the flag." And Harris added this:

When he puts on that suit, when he steps out on that field it's not just about him. It's his teammates, the NFL and the fans. Because the team has to come first. And if he wants to make statements, take a position then that's fine. Go do that, but there's no reason he couldn't do it after practice on another platform than doing it with his suit on and at the stadium ... and then also to bring his team into it, his teammates and the NFL. He could have done it anywhere else and no one would have said anything. Once he put on that suit, stepped on that field that represents more than that.

Harris said Kaepernick has the freedom to voice dissent, but "he could’ve done so on different platform and without dragging the football league into it." He said the Pittsburgh coaches and team leaders "would’ve confronted Kaepernick over his protest" if the protests occurred on his team.