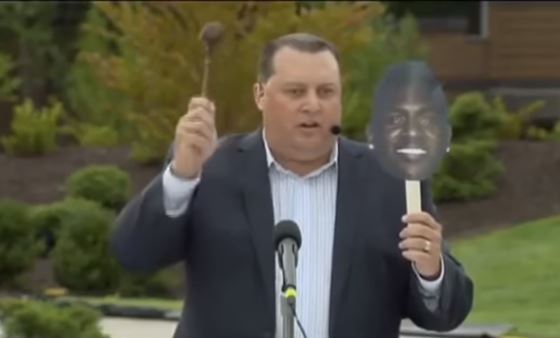 ESPN is eating crow -- Jim Crow -- and enduring the humiliation of its fellow race-baiting rivals, many of them crowing about its racial insensitivity. The Worldwide Leader in Sports is apologizing for a segment in a 28-hour marathon in which an auctioneer "sold" NFL players. The headshot photos of black and white players were attached to popsicle sticks, and drew criticism on social media that the auctions were too similar to the slave auctions of olden times.

The liberal network that accuses President Trump and police officers of racism responded to criticism by hitting rewind and telling USA Today it had made a huge mistake:

Auction drafts are a common part of fantasy football, and ESPN’s segments replicated an auction draft with a diverse slate of top professional football players. Without that context, we understand the optics could be portrayed as offensive, and we apologize.

Numerous media tied in the ESPN auction to the violence in Charlottesville that occurred two days earlier. Daniel Rapaport, of Sports Illustrated, wrote, "The segment was aired in wake of the gathering of multiple white supremacist groups in Charlottesville, Va. ... Auction drafts are somewhat common in fantasy sports. In auction leagues, each team is given the opportunity to bid on a player, with the highest bidder securing the player's services. That in itself could present ethical concerns, and yes, white players were 'sold' too. But ESPN's choice to bring on an auctioneer to sell black men is remarkably terrible optics and betrays a lack of diversity in whatever group approved the segment."

Odell Beckham Jr., the star receiver of the New York Giants, tweeted that he was "speechless" after he was auctioned off by ESPN. Ray Sanchez of CNN reported," The fast-paced pitch ends with the sale of the New York Giants' wide receiver, who is black, for $34 to a white man the auctioneer calls 'Shiny Top.'" 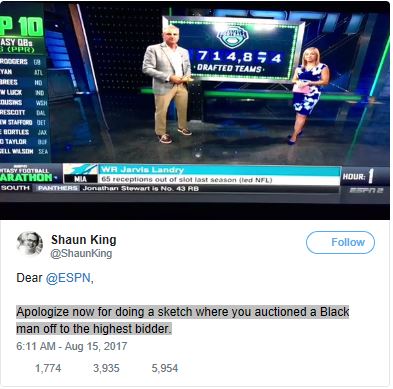 Kenny Mayne, a sports anchor at ESPN, defended the episode:

Fam-The optics aren't good-agreed. But it was replicating Fantasy Football auctions--whites up for bid. too. We appreciate you.

Nicholas Hautman, of US Magazine, wrote the ESPN live audience was "mostly white." (If the audience had included an equal number of Blacks, Asians, Whites and Latins, would that have lessened the criticism?) He also reported that Steve White, a former NFL player, asked, "How. How does not one person stand up and say 'Yooooooo maybe let's not do this.' ?!?!"

Breitbart's Dylan Gwinn called out the race-baiters for their hyper-sensitivity:

The insanity of this, other than the fact that we apparently can’t even have fantasy football auctions anymore without injecting race into it, is that the NFL is full of instances like this where someone could see the wrong thing if they wanted to.

How is a fantasy football auction any different than a bunch of white guys with stopwatches making black men in shorts run 40 yards? How is it worse than a bunch of white billionaires jumping up and down and cheering, after they draft some young black player who has no say in where he goes?

The current hysteria about race stems largely from the Obama Administration, Democrats and biased reporting by the left-stream media from Ferguson, Baltimore and other sites of civil unrest. Colin Kaepernick, Michael Bennett and LeBron James are stoking the race-baiting fires from their large platforms as well. Lib media fully support them and would have us all believe it's still the era of Dred Scott when Blacks were commonly treated as less than fully human.