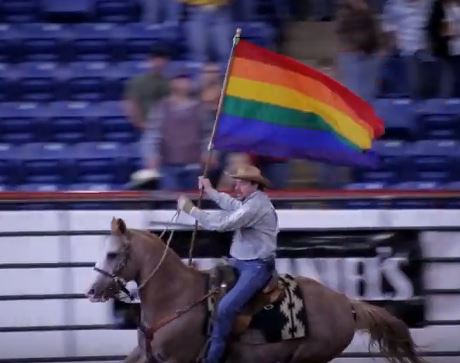 The Washington Post sports section is suddenly showing a lot of interest in unusual events. If you're saying there must be an agenda behind it, you're absolutely right! The Post's story on a homosexual rodeo follows the typical major metro daily script on liberal issues and people: portray them as sympathetic figures doing normal things. Normalize the illegal or the unusual. Help the LGBT agenda occupy yet another part of the culture until it is awash in the rainbow flag.

Roman Stubbs normally covers University of Maryland sports, but recently made a stunning departure from his normal beat by detouring to Harrisburg, Pa., for some agenda reporting. That was the site of the sparsely attended Keystone State Gay Rodeo. It's run by the International Gay Rodeo Association, which has more defunct chapters than active, but it's newsworthy to the Post and worth brownie points with LGBT activists.

Stubbs' story focuses on Louis Varnado and Andy Pittman, rodeo competitors ... and husbands: "The married couple from Upper Marlboro shared a kiss and whispered good luck to each other before lining up with the other riders."

Competing against each other in the pole (and gender) bending competition, Pittman "beat his husband's time" and then "gave his husband a thumb's up." A nearly breathless Stubbs recounts ...

This was the kind of moment that Varnado and Pittman longed for when they arrived late last month at the inaugural Keystone State Gay Rodeo, the first gay rodeo in the region in at least seven years. They had been bonded by horses for much of their 34 years together, and like so many other gay cowboys who feared they would not be accepted by straight rodeo circuits, Varnado and Pittman began competing in gay rodeos nearly two decades ago because it gave them a growing, accepting community.

Varnado and Pittman loved everything about the gay rodeo culture when they first joined the International Gay Rodeo Association in the late 1990s.

Especially the rodeo-associated camp-outs, perhaps their own version of Brokeback Mountain?

But they also were allured by how gay rodeo separated itself from its more traditional counterpart with “camp” events including “wild drag racing,” in which three contestants dress up in thrift-store clothing and try to direct or drag a steer across a finish line; and “goat dressing,” which requires two contestants to slip a pair of white briefs on the back of a goat.

"This was the kind of life both envisioned when they first met in Louisiana more than three decades ago, after Varnado split with his wife," Stubbs writes, as if those bizarre "camp" events were normal activities.

Homosexual rodeos would not be complete without a little romance either. Stubbs tells how Mark Smith married Floyd Zwiers in a ceremony in the middle of a rodeo arena. A photo embedded in the story displays the two showing off their wedding rings.

"And while it is not every rodeo that (International Gay Rodeo Association president Bruce) Gros officiates a wedding, those are the kind of celebrations that tie the organization together," Stubbs says, probably grabbing for a tissue by now.

Some of these rodeo hands said they feel snubbed by mainstream rodeo, but the Professional Bull Riders organization has contacted Gros about a relationship in the future. “What we’re looking forward to is the day that there are out cowboys and cowgirls competing in the professional level, but that has not yet happened,” he said.

Maybe that's because many Americans, in a majority of states, were disgusted and disenfranchised when activist Supreme Court justices mandated same-sex marriage as the law of the land. They voted for marriage as the union of one man and one woman because it's been the bedrock of civilization, and the High Court threw out their votes. They won't be amused by the way this story ends either.

Varnado won some money at the Keystone rodeo, prompting this line from Stubbs: "Pittman gently wrapped his arm around his husband’s neck and said: “I’m proud of you, baby doll.”