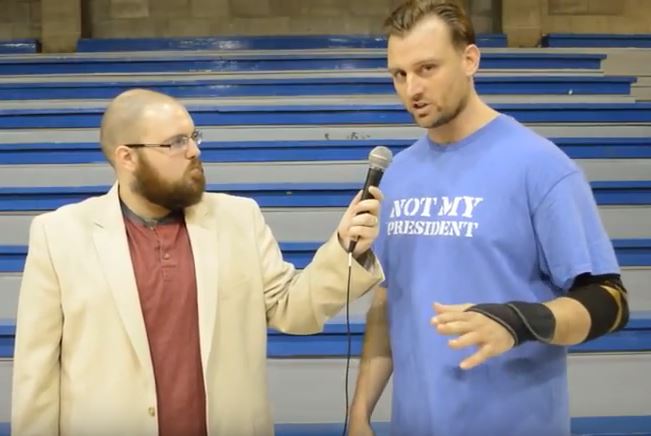 What could be better for the Left-stream media than a sporting event in which a far Left progressive athlete grabs a microphone and uses it to insult President Trump, Fox News and Republicans? That's what Dan Richards -- the "Liberal Progressive" -- is doing on the Kentucky wrestling circuit, and Left-stream media are digging it big-time.

Sports Illustrated interviewed Richards, who said, "Step aside, Nancy Pelosi. The Progressive Liberal is here." Samer Kalaf, writing for the often-vile Deadspin, gleefully went with the headline "No One Is Pissing Off Local Wrestling Crowds Like The "Progressive Liberal." Even the smug Washington Post devoted ink to this loud-mouthed lefty. Post reporter Travis Andrews wrote on "wrestling’s new villain."

Richards sports a shirt claiming "Not My President" and another with patched-up cut-outs of Hillary Clinton photos. He wears shorts emblazoned with a donkey, the sign of the Democrat. Richards' signature finishing move is his "Liberal Agenda."

Andrews writes, "His shtick is simple. He plays a smug liberal elitist who lectures the audience of political matters." His enemies are ticket-buying fans and "Fox News maggots.'"

Richards made a promo video in which he says: "You people need to be reprogrammed. You continually vote against your own interests. You put people in Congress and the White House that aren’t going to help you. They’re not going to bring your jobs back. We're going to teach you to read and write. You’ve traded your red, white, and blue American flag for a Russian flag."

Andrews claims, "These may not sound like the most scathing of insults, but at a time when politics are a breeding ground for intense, burning emotion, it seems to work brilliantly." Brilliantly to fake news/faux journalists, but Richards does get under the skin of the audience. Fans detest him and yell back at him. Pro "rassling" may be melodrama, but to progressive media types the incivility is fantastic when conservatives are the target.

Regardless of how much Richards plays off the left-wing politics to crowds in Kentucky and nearby states, it works. Look no further than the videos to see that those crowds despise him. There's a kid in the crowd telling him to shut up, and relentless jeers, or Trump masks worn by attendees. And even the occasional death threat. ..., at a 2016 show in West Virginia, where Richards spoke about taking everyone's guns, a patron displayed a pistol in a holster on his right hip and started rubbing it."

Daniel Harnsberger, a real estate agent and real-life lib, conceived this shtick when Trump started campaigning for president. He said then, "If he's elected president, I hope Trump doesn't build a wall around Mexico. Instead I hope he builds it around this town so none of you people can infiltrate the population."

Andrews writes: "Despite the anger he's provoked -- or, more likely, because of it -- Harnsberger plans to continue wrestling as the "Progressive Liberal" Dan Richards. After all, it kills two birds with one stone, both fueling his wrestling career and allowing him to spread his beliefs." And if a left-stream reporter can spread his beliefs by covering a progressive wrestler then he's also got one more way to get out the progressive word.

Kalaf writes, "this is the perfect place and time, and Dan Richards has built a sustainable meal ticket. ... For the time being, it's an absolutely foolproof heel. And he'll always be the heel. ... This gimmick has an expiration date, because they all do, but for the time being, the Progressive Liberal is something as fresh as it is seemingly obvious, with a lot of potential to go wider—or be copied elsewhere."

Nothing could empty the seats faster at real sporting events if this is copied elsewhere!

Richards also enjoys talking progressive politics in interviews with progressive media. He told SI's Greene, "I voted for Hillary. I definitely wanted her to pull it out. ... I thought Hillary would win, as a lot of people did, and then I would be able to gloat and that would be great. Then when Trump won ... it’s made the reaction stronger, because the fans have something to laugh at me about and jeer me for."

Can there be any doubt the Liberal Progressive gets his political facts wrong from following the Left-stream media? All that fake news is putting them flat on their backs on the mat and down for the count.