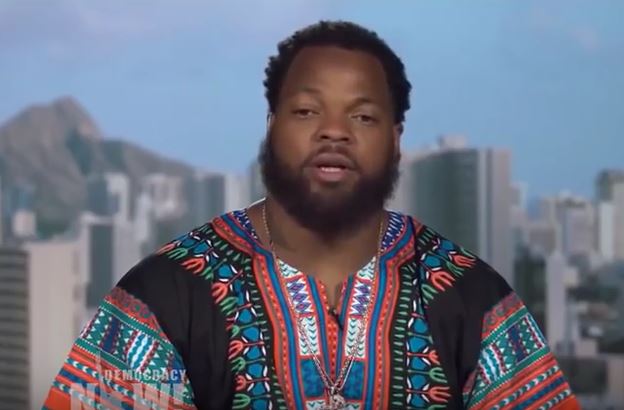 With Colin Kaepernick confined to the NFL's desert of unsigned free agents, Michael Bennett has clearly assumed the mantle as the league's most controversial player. Alleging this week that the NFL is too white, he is now writing his way to controversy, too. ESPN writer Sheil Kapadia revealed that Bennett is releasing a book, "Things that Make White People Uncomfortable," late this year.

The book will be politically and racially charged, an inconvenient fact that Kapadia avoided mentioning.

I think the league is built on middle America, and most of the middle of America is predominantly a white crowd. That's just the truth of it. I think race is not something that the NFL wants to be a part of or get behind. But the league is predominately African-American.

So the issue that he's dealing with is what we're all dealing with. We all come from the inner city or we've been part of communities where we felt like we've been judged because of the color of our skin or who we like or if a woman -- any issue to deal with. We've all been dealing with it with someone in our family.

Bennett spent time with Kaepernick this offseason and wears an "I know my rights" t-shirt to express his support for the campaign started by his controversial friend. "Obviously, there's the elephant in the room why Kaepernick isn't signed, and most people know why," Bennett said. "I've said this several times, and I'm not afraid to say it: I think race and politics is something people don't want to hear about, nor do people want to be a part of."

Bennett was inspired to write the book by Kareem Abdul-Jabbar, who boycotted the 1968 Olympics, and Dave Zirin, sports editor for The Nation, a progressive publication.

Zirin and Kareem may end up doing Bennett a disfavor by helping him spread his racist messages. Bennett has only averaged 5 1/2 sacks per season and currently has just a year left on his $28.5 million contract (financed in part by white people; "that's just the truth of it.") If he isn't productive in 2017 after his words -- written and spoken -- alienate NFL fan bases, he could potentially join Kaepernick in the desert. Teams may not want to pay a 32-year-old veteran of nine seasons the big bucks if he's in decline. And if he's got an insulting mouth.

As for Kapadia, he gave Bennett special treatment, allowing him to spew without acknowledging any hint of the racism expressed. Tim Tebow is called polarizing for praying by ESPN and other media, but Bennett can denigrate a whole race without any qualifier or question raised by the writer.