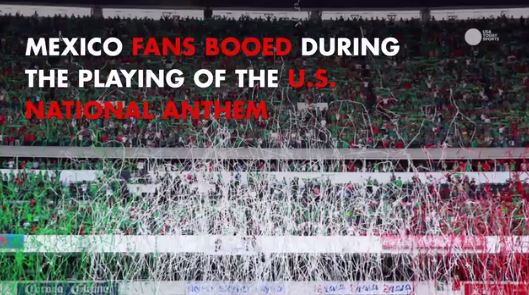 President Trump did not attend Sunday's international soccer match pitting Team USA vs. Mexico in Mexico City, but he was topic numero uno south of the border. Mexican fans made the game a forum on Trump, and they booed loudly and blew air horns during the playing of the Star Spangled Banner. However, American media were much more exercised about "homophobic slurs" directed at the USA goalie than the attacks on America, its anthem and president.

Many Mexican soccer fans wore t-shirts stating "(expletive deleted) Trump." At a tailgating party in the parking lot, Mexican fans jubilantly kicked around a Trump pinata. They sang "we don't want the wall," and a truly objective reporter could have taken that queue to point out that there's a wall on Mexico's southern border sealing off the same kind of illegal immigration Americans don't want on our southern border.

United States goalkeeper Brad Guzan was taunted with an offensive word and homophobic slur within the opening minutes of the national team's World Cup qualifier in Mexico on Sunday night.

Guzan was the latest opposition keeper to be on the receiving end of the Estadio Azteca crowd's long-standing habit of yelling "puto" -- which translates as "gay prostitute" -- whenever visiting players take a goal kick.

Rogers also made sure his readers knew that stadium officials issued verbal and electronic messages urging fans to stop offensive remarks. No such efforts were made to discourage the vulgarities issued toward the U.S. president or national anthem. Little attention was given to the fact that American fans viewed the match from an area of the stadium surrounded by a cage for their own protection from Mexico's unruly fans.

"To say that there is negative sentiment toward the regime of President Trump here is both obvious and a huge understatement," Rogers wrote. "A few miles from the famed and daunting Azteca, a museum recently hosted an exhibition filled with caricatures mocking Trump. One featured him as a Nazi, and others as the devil, the Grim Reaper and a Ku Klux Klan sympathizer."

Rogers even quoted the American coach as an apologist for the U.S. In the pre-game press conference, Coach Bruce Arena said, "I'm ashamed that there's perhaps some discord on the political side. But believe me I think most Americans appreciate the Mexicans that have come to America to make a better future for themselves and their families and the way they have contributed. ... We think the world of them."

Although fans had come to Mexico City's fabled stadium to watch a World Cup qualifying soccer match against the United States, and not talk politics, President Trump was everywhere.

His face was emblazoned on signs and T-shirts, sometimes along with a middle finger, and on giant posters that featured a slur sometimes directed at gay people.

Linthicum quoted Agustin Sanchez, 60, who lived in California for 30 years and was deported six years ago. He said President Trump is trying to destroy his family and he fears that his some of them, who are now serving in the U.S. military, will be discriminated against.

Lost on Linthcum is the glaring fact that Barack Obama was president six years ago.

Greg Hadley, writer for McClatchy, wrote: "The boos, audible on the Fox Sports broadcast and widely reported on social media and by ESPN, come at a time of rising tensions between the U.S. and Mexico politically, as U.S. President Donald Trump maintains that he will build a border wall between the two countries and Mexican President Enrique Pena Nieto recently hosted German Chancellor Angela Merkel as a sign of solidarity against Trump, per the Associated Press."

In other words, our visiting soccer team and fans had the rough reception coming to them because of Trump.

One final note: the game ended in a 1-1 tie, though America's left-stream media treated that small fact as an after-thought when there were bigger fish — President Trump — to fry.