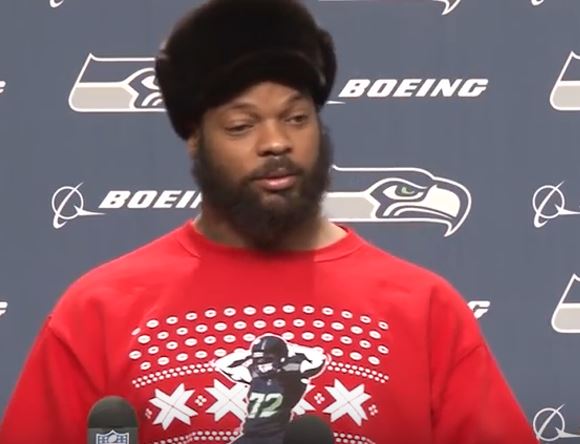 One week in, the new ESPN policy move toward “balance" in political reporting is failing badly. This is based on two actions immediately following the so-called policy changes by the biggest name in left-stream sports media. Both are indicators that ESPN is actually doubling down on its hard-left mooring.

First, it was just a day after ESPN’s editorial board released guidelines for balanced reporting when the left-stream network removed the conservative Sage Steele from the NBA Countdown program. They insist her demotion had nothing to do with this, but who's going to believe that coincidence?

Dodson attended a speaking appearance in D.C. by Bennett, a sacker of just five quarterbacks last season, whose voice has taken on huge significance for those on the Left. Bennett’s appearance was dubbed “Silenced No More: Michael Bennett on Activism and Pro Sports.” The event was moderated by two leftists: The Nation sports editor Dave Zirin and Noura Erakat, a Palestinian-American human rights attorney and professor at George Mason University. No pretense of balance here.

Dodson informed readers that “Bennett has been live and direct in his own right, including calling out two-time NBA MVP Stephen Curry for charging kids to attend his summer camp and criticizing an investigation conducted by the FBI, NFL security and Texas law enforcement to find Tom Brady’s stolen Super Bowl LI jersey, even though 'we still don’t know who killed Tupac and Notorious B.I.G.'”

Also, Dodson wrote that Bennett continues to support cop-hating, unemployed quarterback Colin Kaepernick and he withdrew from a tour of Israel because he said he didn’t know about the injustices being served on the Palestinians. He cried about the Palestinians as he said:

I didn’t know what was really going on to certain people. It was emotional to me because I seen so many different things. … I seen the people, I seen the kids, I seen the women, I seen the wall, I seen all this stuff that all these people weren’t being able to do, I seen the school. I just seen so much. I was just like, ‘Man, this just reminds me of being in the civil rights movement and what’s going on at this time.’ For me, I just couldn’t do it.

Bennett told the audience not to tweet about him crying because that might prompt a call from Tom Brady. The crowd booed at the mention of Brady, a friend of President Trump’s.

Of course I feel like he’s being blackballed, obviously because of his position. … For Kaepernick to take that knee, it changed a lot of people’s minds. It ruffled a lot of people’s feathers. It ruffled a lot of locker rooms agent after his season of protest. I talk to him all the time, and it’s like, ‘Wow, man, you’re like on a whole ’nother level. You’re doing it. You’re doing exactly what you said you’re gonna do. You followed through, and you’re a man of the people.’ To love the people, you have to be able to die for the people. And I don’t mean dying physically, but dying spiritually. Changing your whole mindset of who you used to be and what you thought was important. Now that your eyes are open, it just changes you.

ESPN’s eyes are certainly not open to any principles of journalism or balance, and it doesn’t appear to be ready to embrace these ideals anytime soon. The recent policy change appears to be every bit to a smokescreen as a farce. With ESPN subscribers dropping en masse each month, this is less and less a network “of the people.”