Roland Martin on News One Now: Colin Kaepernick Is Being ‘Whiteballed’ 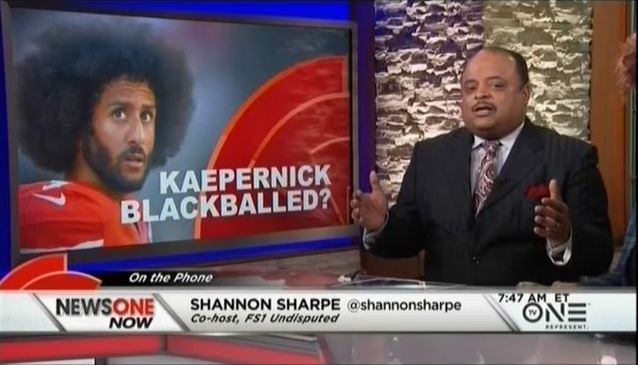 The prolonged free agency of cop-hating, baggage-toting quarterback Colin Kaepernick has prompted the formation of a new sports fantasy game. It’s best played by race-baiting, left-stream talk show performers who have the unique ability to read the minds of NFL owners and general managers.

News One Now's Roland Martin invited Fox Sports 1’s Shannon Sharpe onto his show for the debut of this new offshoot of sports fantasy. Spoiler alert: Martin concluded the game by claiming, “Well, I think in this case here we'll change our graphic, Colin Kaepernick's not being blackballed, he's being whiteballed.”

Both fantasy game players scored big points on the way to that conclusion. Martin began by going into the minds of unnamed, strawmen owners and GMs by assuming they're saying, “There's a lot of teams don't have a quarterback. All of a sudden Colin Kaepernick just can't play?”

That comment easily lured Sharpe in and the game of fantasy sports was off and running. Sharpe reads the minds of the owners and GMs this way:

“Now, there's a segment of those the general manager and owner [who] says Colin Kaepernick's play has just fallen off too much. And the system that we run, it wouldn't be conducive. There are a segment of those owners and general managers who say the blowback would just be too great. From our fan base, from our sponsorship, we just can't take that on at this current time.”

Now fully emboldened in his ability to speak for unnamed owners and general managers, Sharpe scored again, saying, “What we feel he did is worse than us hiring someone that got behind the wheel of a car killed someone is worse than what, you know, domestic violence against a woman or a child. He's being labeled unpatriotic.” Again, no names, no attributions. When you are skilled at mind reading, such trivialities are unneeded. Big points for Sharpe!

Martin wasn’t about to be left in the sports fantasy dust. He dredged up this gem from imaginary NFL club officials, whom he called “absolutely hypocrites” for this fictional quote. “You made the point that if he beat a woman, if he did cocaine, if he got busted for drugs, we'll welcome back with open arms, but how dare he actually exercise the First Amendment?”

Martin then lost crucial fantasy points when he committed a hypocrisy foul by naming a general manager and questioning his First Amendment rights. He criticized Denver’s John Elway for sending a letter, on team letterhead, to President Trump in support of Supreme Court nominee Neil Gorsuch. “That’s good! But Colin Kaepernick, how dare you?”

With victory assured in the debut of this new sports fantasy game, Sharpe took a knee and ran out the clock on Martin. He stated that Kaepernick “is up against it,” and said he doubts the QB will sign with a team before summer training camps begin. “But I think he understood that when he took the stance that he took, Ro.”

In the post-game wrap-up, Sharpe promised that he will not “stick to sports. So I'm going to jump back and forth between sports and politics, moving forward until I get tired. Which I don't get tired.”

That’s not surprising because the fertile minds of those in the left-stream media never seem at a loss in their amazing capacity to stretch the truth beyond all recognition.