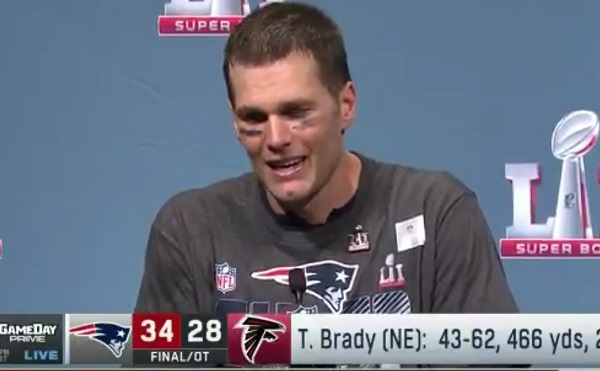 Kang’s opening volley – Should Athletes Stick to Sports? – is a rhetorical question. He agrees with sports media critic Bryan Curtis that it’s a moot point now. “Trump’s presidency, with its daily explosions, has made it impossible to cover pro sports, even in the simplest box-score ways, without detouring onto the White House lawn. This comes, in part, from the way basic sports coverage works. Reporters ask questions before and after every game, and when the only thing anyone wants to talk about is Trump, some of those questions will be about the president.”

But the cart’s leading the horse here! Biased media are baiting athletes with loaded questions, then claiming “the only thing anyone wants to talk about is Trump.” Later the confused Kang admits the media endlessly badgered Tom Brady about his “Make America Great Again” hat. That’s right, and Kang’s copout notwithstanding, it’s the media driving the trend, not the other way around. Sports journalist are liberal, and liberals are constantly shrinking the spaces that have traditionally been politics-free. It’s what they do.

Kang says the latest intrusion of political talk into sports “has had a drastic effect on coverage. It has brought with it a currency and immediacy that we haven’t seen since the ’60s and early ’70s, when athletes like Jim Brown, Kareem Abdul-Jabbar and Curt Flood openly talked about civil rights.”

Then the Times writer cries wolf. He says that on the day when President Trump announced the immigration and travel ban, “there was some concern” that Milwaukee Bucks’ rookie center Thon Maker, originally from Sudan, would not be able to return to the U.S. after a game in Toronto.

Come on, Kang, get real! Did anyone really think for a minute that government officials were hunkered down in the White House war room, monitoring a basketball player’s whereabouts and planning to prevent him from returning to the States? A little paranoid, are we? Just a little sensationalistic?

“Maker was directly affected by Trump’s policies (though he re-entered the United States without problem),” Kang admits, backtracking his sensationalistic claim off the cliff. How can you be directly affected and then not experience any sort of problem? The liberal mind is a hard thing to figure out.

Nonetheless, Kang says the days of Tiger Woods, Derek Jeter and Michael Jordan abstaining from politics are over. “Athletes, especially famous ones, are less likely to be left to stand alone as ciphers of sporting excellence. Their images will be shaded by their politics, even if these have to be assigned to them (emphasis added). And as players continue to be asked about their political beliefs by reporters — especially as the international players in basketball and baseball are prompted to talk about immigration — they have an opportunity to give voice to resistance.”

And the media will only be too willing to prompt that voice because the politics of athletes must be assigned to them by the all-knowing/all moral sports media! And who’s politics? Why, the Far Left's, of course.

The good ladies of the Women’s NBA can serve as role models for male athletes, Kang tells us. These cultural crusaders “have been exemplifying thoughtful political expression.” Thoughtful leftist political expression, that is. The ladies have been wearing Black Lives Matter t-shirts in pre-game practice, and rookie of the year Breanna Stewart attended the airport protest at LAX. To the utter delight of left-wing sports media.

Outspoken athletes are all the rage, in Kang’s view. He’s thrilled that six members of the NFL champion New England Patriots plan to boycott the team’s White House victory celebration later this year. Among them are Martellus Bennett and Devin McCourty, who previously “raised fists in solidarity with Colin Kaepernick’s national-anthem protest.”

When the day of that White House celebration arrives, agenda-driven “reporters” will undoubtedly bait those Patriots’ who stayed home, with loaded questions. “Which will provide another occasion for criticism,” writes Kang, revealing his true motive.

There you have it. We’ve moved from “stick to sports” to “occasions for criticism.” RIP, objectivity.