Sally Field Is So Mad at Pro-Lifers, She Might Physically Assault Them 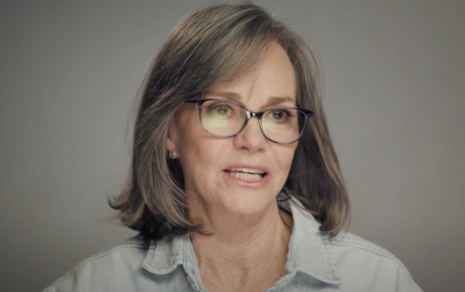 n a recent interview with Hollywood outlet Variety, the Academy Award-winning actress even hinted that she might visit physical retribution on the various Republican lawmakers who are pro-life.

During the interview Field appeared to have made the most extreme interpretation of these pro-life lawmakers possible. She said she believed that “those men who are doing that, and they’re mostly male governors who are doing it, are so backward, so ignorant and really just power hungry.”

Um, ok? So protecting innocent children from the slaughter is backwards, ignorant and power hungry? Any sane person knows that Field seems to be the “backwards” one here. It seems she’s like the typical leftist who completely ignores the plight of the unborn child and focuses on the fact that lawmakers are saying “No.” In that way, they’re tyrants.

This is the definition of a bad faith argument.

Field continued with her unhinged perspective, saying, “I think it’s criminal. They’re so wanting to roll back the achievements and important progress for women, for blacks, for the LGBTQ community.”

Again, how is killing your kids progress? This is a travesty for minority communities. And another question for the reductive, science-minded left: how do they even square abortion with a Darwinian, evolutionary understanding of biology? Killing its own young is not progress for a species.

They can’t. But don’t let anybody tell any woman “no” you can’t kill your baby. It’s her right, dammit!

Sadly these beliefs are par for the course for lefties, especially hyper-emotional Hollywood ones. Where it diverged into remarkable territory was when Fields expressed hatred to the point of contemplating hurting Republican lawmakers, specifically Governor Ron DeSantis (R-FL) and Governor Greg Abbott (R-TX).

“I can’t say enough horrible things about what I feel about those men,” she stated, adding, “If you see them coming toward me, those two governors specifically, lead me out of the way because I cannot be responsible for what I would do.”

Field then turned towards her publicist during the conversation, and said, “Heidi, do you hear me? Lead me away.”

Well, Field is insane. The flat truth here is that she’s so mad that abortions won’t be as frequent in these states that she might get violent over it.

Despite her open hatred, we must make sure to pray for Ms. Field. As LifeNews.com reported, the actress alleged to having been sexually abused as a child by her stepfather and then committed an abortion when she was seventeen. Perhaps all that grief and pain is coloring her emotional state on this topic.