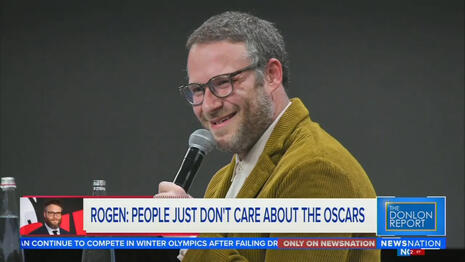 Hollywood bully and Senator Ted Cruz’s Tinseltown nemesis Seth Rogen is laying down his acerbic Twitter personality and having a rare moment of self-reflection. The comedic actor admitted this week that yeah, maybe normal people “don’t care” about the Oscars anymore.

Wow, looks like the abysmal ratings of the entertainment industry’s flagship awards show have poked a small whole in the iron bubble around these elitist jerks.

In a recent interview with Insider.com, Rogen, the brilliant mind behind the artistic stroke of genius that is the stoner comedy Pineapple Express (just kidding), said he sort of understands why ratings for the Oscars are near record lows in the show’s history. Maybe it is lame watching a bunch of people pat themselves on the back for big art projects.

Rogen stated “I don’t get why movie people care so much if other people care what awards we give ourselves.” Wow, Seth. You know, I think we are all thinking the same thing. We give so much cultural weight every year to which actor or which movie gets which best whatever award. But why?

Beyond it being mildly fun at best, It’s really not that compelling and has become even less so in recent years when the people we’ve been excited about winning get up there and start telling us that we are morons for our politics.

But maybe that’s just me, well and everyone else not a part of Hollywood. Rogen never got into the subject of his colleagues’ noxious politics annoying people. So maybe he’s not that clued in. Still he seems to be recognizing that Hollywood doesn’t deserve to view itself as self-important.

He added, “To me, maybe people just don’t care. I don’t care who wins the automobile awards. No other industry expects everyone to care about what awards they shower upon themselves.”

Well when Rogen’s wondering why people even care anymore, you know it’s lame. “Maybe people just don’t care. Maybe they did for a while and they stopped caring. And why should they?” he said.

Of course, Rogen’s just picking up on the obvious. As The New York Post reported, Oscars viewership declined in a huge way over the course of two years. In 2019, 29.6 million viewers tuned into the show, while in 2021 viewership was down to only 9.85 million viewers.

That’s a prodigious drop off to say the least.

Of course we all know that plenty of people are tuning out because of Hollywood’s terrible politics, which became all the more mendacious and mean-spirited during the Trump presidency. Combined with the fact that the Oscars haven’t had a host for the show since 2018 and the pandemic, it’s been a ratings snooze fest.

The real news is that one of Hollywood’s most politically outspoken people is finally admitting his industry’s a bit lame. We never thought we’d live to see that.