Book For ‘3-6’ Year Olds Teaches Being Transgender Is Normal, Common

The transgender assault on America’s children continues unabated. The latest Amazon children’s book recommendation is about a young biological girl who doesn’t like her long hair and her pretty dresses. The moral of that story, apparently, is that this young girl is a boy. 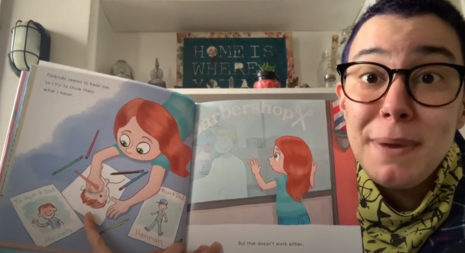 Oh this should be an enlightening read for two year-old boys who like the color pink. According to I’m Not a Girl: A Transgender Story, that’s the kind of sign that might precede a lifetime of gender therapy and hormone treatment.

Amazon’s description of I’m Not a Girl states, “Nobody seems to understand that Hannah is not a girl. His parents ask why he won't wear the cute outfits they pick out. His friend thinks he must be a tomboy. His teacher insists he should be proud to be a girl.” Geez what a difficult existence. Do these monsters not understand that Hannah, a carefree, ginger-haired kid, fully comprehends that she is actually a boy trapped in a girl’s body?

Well who are these adults and mentors to understand, anyway?

Amazon teased that eventually Hannah is able to come to terms with “his” own truth. “But a birthday wish, a new word, and a stroke of courage might be just what Hannah needs to finally show the world who he really is,” it said. Oh just what could this new word be? “Transgender?” Or is it, “delusion?”

The cute drawing on the cover of the book shows a long-haired Hannah peering into the window of a local barbershop, staring longingly as a young boy gets a trim on his short hair. Yep, that’s what Hannah wants. Though again it’s not possible that she is a girl that likes polo shirts and short hair. She’s a boy, plain and simple, at least from the perspective of this book that has been written for preschool age children.

And that’s probably the most disturbing aspect of this whole thing. These books, according to the website, are designed to be read by kids in the “3 - 6 years” age range. Sure, some of these kids are barely potty trained, but hey, they at least know that what’s between their legs does not match their very defined psyches.

Only these toddlers and high level psychiatrists get this, may we remind you.

Anyways, as far as the authors of this propaganda go, one is a very progressive woman named Jessica Verdi, and the other is a twelve year-old transgender boy named Maddox Lyons. So it seems we are packaging and selling Lyons' own personal mental illness to potentially millions of impressionable children?

Remember, as author and gender ideology researcher Abigail Shrier reminds us, actual gender dysphoria is real though it is exceedingly rare. “It afflicts about 0.01 percent of the population, most of whom are male.”

But here we are, encouraging preschoolers to think that just because they like the girl toy from the McDonald’s happy meal, that means they are transgender. And you know liberal parents go along with this. It’s dangerous.