I’ll ‘ABSOLUTELY DO IT AGAIN’: Mayor Lightfoot Vows To Discriminate Against White Journos 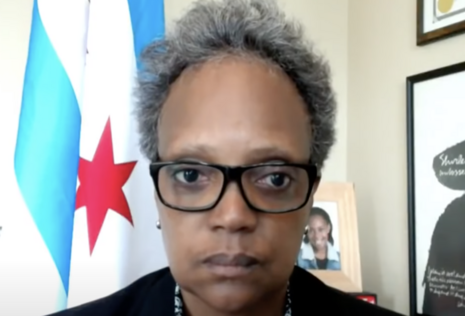 It’s shocking enough that Chicago Mayor Lori Lightfoot thinks combatting racism is done by ensuring that only journalists of color get to ask her questions, but it’s absolutely depraved when she doubles down on her intent to ignore non-minority journalists even after millions have condemned her actions as undeniably racist. Mayor Beetlejuice has succumbed fully to the Black Lives Matter, Critical Race Theory mind virus. She has turned into a woke Marxist zombie.

During a July 26 episode of The New York Times podcast “Sway,” Lightfoot addressed her statement from May that she only plans on having one on one interviews with people of color on the subject of her two year anniversary of being inaugurated mayor. During the recent segment, Lightfoot admitted she “would absolutely do it again.” Oh really? She’ll be robustly racist again? Well isn’t that sweet?

The Democrat mayor, who happens to run a city with one of the nation’s highest murder rates among African Americans, added, “I’m unapologetic about it because it spurred a very important conversation, a conversation that needed to happen, that should have happened a long time ago.”

Oh let us guess. This is about combating “white supremacy,” isn’t it? Though not white supremacy in a racist sense, but in the sense that there just so happens to be too many white journalists from her perspective. “Going back to why I ran — to disrupt the status quo. The media is critically important to our democracy … The media is in a time of incredible upheaval and disruption, but our City Hall press corps looks like it’s 1950 or 1970," the mayor stated.

The status quo in Chicago is double-digit shooting victims every weekend. But disrupting that would take guts and hard work. It easier to pose as a Bizzaro World civil rights activist and segregating journalists. But of course, in a post-George Floyd society, promoting diversity is about punishing people for historical stereotypes that aren’t even true. Yeah, some white people in history owned slaves, so let’s treat people with that same skin tone like garbage.

That’s CRT for you and it has infected one of the most visible and powerful people in America.

Again, Lightfoot’s original heinous racist statement came last May when she wrote in a letter, “By now, you may have heard the news that on the occasion of the two-year anniversary of my inauguration … I will be exclusively providing one-on-one interviews with journalists of color.” Apparently this was the elected activist’s opportunity to amend the “overwhelming whiteness and maleness of Chicago media outlets.”

The mayor added that “as a person of color, I have throughout my adult life done everything that I can to fight for diversity and inclusion.” Well that’s all well and good, Ms. Mayor, but promoting diversity hardly excuses bigotry.