Dudes with baby bumps, be overjoyed! You might be getting an actual emoji specially made just for you. 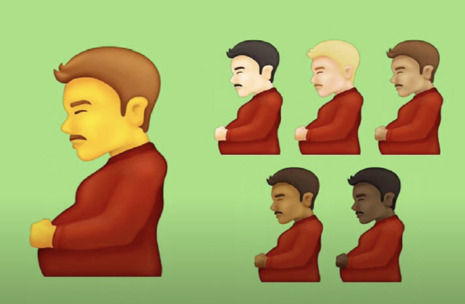 Sure reality may not recognize your identity but your smartphone may! Apparently a “pregnant man” emoji is a final contender among new characters to be introduced in texting devices. A pregnant man? Really? Men can’t be pregnant.

The New York Post reported on the whacky, and frankly evil, pop culture development which mirrors the transgender craze that’s going on in our society. The outlet wrote, “Several gender-inclusive and non-binary images — including one titled Pregnant Man —  could be released for smartphone use in September, according to emojipedia.org.”

The emojipedia.org entry on the potential new entries featured a ridiculous image of the “Pregnant Man” character and all his variations. The image featured what appears to be a human man from the waist up facing to the left. At first glance, one might think the “man” is holding his stomach after eating too much at Thanksgiving dinner, but upon closer inspection it’s clear that it’s a man with a baby bump.

There are multiple iterations of this. Some of the pregnant “men” have mustaches, others are clean shaven. Some are black with mustaches and shorter hair, while others are white with longer hair, but clearly each one looks like a dude who’s in the third trimester of pregnancy. What on earth? This can’t be real.

In their description of the wackadoo tech update, New York Post added, “It comes in medium to dark skin tones, along with a similar facial-hairless emoji, dubbed ‘Pregnant Person.’” Oh yeah, that’s the version that’s so PC, it can’t even acknowledge that male and female exist. We wouldn’t want to assume. It is 2021 after all, a year in which reality isn’t even acknowledged.

Of course men can’t be pregnant, but for the radical left, a trans man (biological woman) is just as man as a biological man – even if she was born with a uterus. Thus a woman who is “transitioning,” or taking hormones to look like a man, can still have a baby in her womb and call herself a man. Yeah it’s freaking insanity, but better for insanity to exist than the wounded ego of some confused mustached pregnant woman, right?

That’s the twisted leftist logic of this whole thing.

There’s still hope (but not much) that this abomination doesn’t actually show up in texting options in the future. Emojipedia clarified, “As this is only a draft emoji list, each emoji is subject to change prior to final approval in September 2021.”

Though who are we kidding? The fact that this is even a serious option means we are doomed.