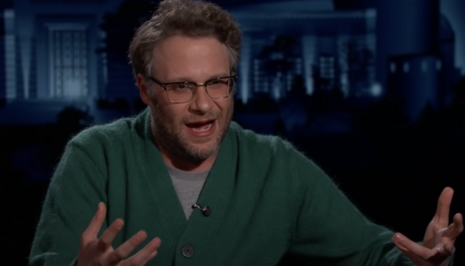 Seth Rogen, the rabid liberal, Ted Cruz-hater and stoner comedy guru who hasn’t made a funny movie since 2014, is now defending cancel culture and saying that all the professional comedians complaining about it need to man up.

In an interview with Good Morning Britain on Tuesday, Rogen claimed that he’s cool with cancel culture. He summarized the whole cancel culture phenomenon as people merely getting feedback for lame jokes. “If you've made a joke that's aged terribly, accept it,” he shrugged.

Oh yeah, it’s as simple as that, Seth?

Upon being asked by the GMB hosts whether people in this woke day and age see Rogen’s body of comedic work in a different light, Rogen essentially said, probably, and that’s just fine. “There are certain jokes that for sure have not aged well, but I think that's the nature of comedy,” he said, adding, “I think conceptually those movies are sound, and I think there's a reason they've lasted as far as people still watching and enjoying them today. Jokes are not things that necessarily are built to last."

And of course, some things aren’t funny to different audiences. Not everyone likes stoner humor, for example. But for Rogen to conflate that natural reality with cancel culture – that method of people campaigning to get a person to pay a steep price for politically incorrect  thoughts – shows his blindness.

Seth Rogen says he doesn’t understand why some comedians complain about "cancel culture":

“Saying terrible things is bad. So if you said something terrible, then that’s something you should confront … I dont think that’s cancel culture.” pic.twitter.com/qZGETFkAFv

But again, what about people who are fired from a gig or blacklisted from their own comedy career in general for jokes made in the past? Is that what people deserve for bad jokes? Would Rogen say that Kevin Hart being harassed into stepping down from hosting the 2019 Oscars for jokes made in 2011 is the way it should work?

As opposed to mealy-mouthed Rogen, Comedy legend Chris Rock, who is also a committed leftist BLM supporter, thinks that cancel culture goes way “beyond” audiences responding poorly to a bad joke. “It’s weird when you’re a comedian because, like … when the audience doesn’t laugh we get the message. You don’t really have to cancel us because we get the message,” Rock stated on May 21, adding, “We should have the right to fail because … because failure is a part of art. You know what I mean?”

But as far as what Rock said is actually going on, he stated, “now you’ve got a place where people are scared to talk. That’s not … you know, especially in America you’re scared to talk.” And because of that people are afraid to “make a move” and say something actually funny.

Take it from a real comedian, Mr. Rogen. Comedy is suffering because of cancel culture, and if you’re defending that, then you’re killing funny, not making it happen.