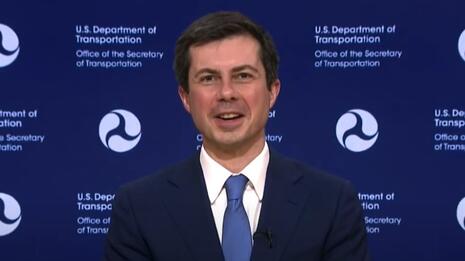 What’s the most politically compelling thing that streaming giant Amazon could put out right now? A docu-series on Andrew Cuomo’s COVID-related scandals throughout 2020? How ‘bout a documentary on how a basement-dwelling Biden beat an incumbent president using dirty media tactics, among other things, to save democracy? Nope, instead Amazon will be gracing audiences with a documentary about … wait for it … Pete Buttigieg!

Really, Amazon? Honestly, another exposé about Trump family corruption would be preferable to this. Even if it were manufactured, at least there’d be some suspense and drama.

Anyway, The Hollywood Reporter announced on February 22 that “Jesse Moss is directing the film about the former U.S. Democratic presidential candidate and current U.S. Transportation Secretary.”

You mean the guy Trump accurately compared to the buck-toothed Mad Magazine mascot, who thought taking pictures next to trains after acquiring his cabinet position was badass? It’s all so annoying and we haven’t even begun to talk about his radical left-wing politics and bastardization of Christianity.

The movie, titled Mayor Pete, is being produced by Story Syndicate and “follows Buttigieg on the campaign trail and at home in Indiana with his husband, Chasten.” Hmm, it should be really exciting. We get an inside look at all the classic campaign action like that moment when we found out that Buttigieg had virtually zero popularity within the African American community, or when he tried to downplay the scandal of law enforcement finding the remains of over 2000 dead fetuses in the home of an abortion doctor who practiced in South Bend during his time as mayor.

Buttigieg remarked at the time that the dead babies situation was horrible, but he didn’t want the politics of it to “downplay” the importance of women getting abortions. Dead baby bodies are horrible, but the procedure that makes dead baby bodies is still a cool part of the Buttigieg platform. What a guy!

We all know Amazon Studios will be looking to glorify Buttigieg, a young LGBTQ presidential candidate who served in our nation’s military and uses Scripture to endorse abortion. It’s just the right amount of subversive content the streaming giant would love to aim straight at middle America. Who cares if he was a failed candidate? He served in Afghanistan and attends gay pride marches. Take that, Meemaw!

THR claimed, “Mayor Pete reveals the inside story of the campaign for the White House and the ways it changes the lives of those at its center.” Yes, rest assured it will be lovely. Also, the same studios that produced the upcoming documentary, produced a documentary about failed-Georgia gubernatorial candidate and talented ballot harvester Stacey Abrams, called All In: The Fight for Democracy.