A Real Obummer: Lefties Mad at Obama for Throwing Cold Water on ‘Defund the Police’ 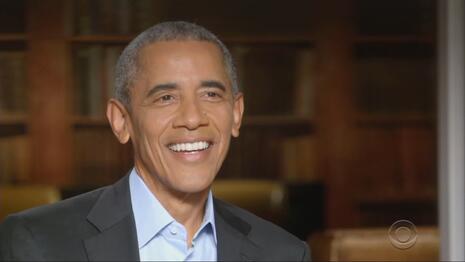 Come on, guys. Everyone knows that beyond instigating a violent insurrection and anarchy against law enforcement, “defund the police” isn’t really a viable campaign policy. Even Barry Obama knows this. In a recent interview, the former president decried the slogan and the radical leftists at Jezebel blasted him for his lack of commitment to their most radical policy dreams.

Jezebel, the choice rag for rebellious feminists, disparaged and frankly mocked Obama in a recent piece after the 44th president repudiated the “defund the police” slogan that many lefties had adopted after George Floyd’s death.

During an interview with social media news outlet “Good Luck America,” Obama told host Peter Hamby that “‘snappy’ slogans like ‘defund the police’ could be jeopardizing [Dem politicians’] goals of enacting meaningful police reform.” Well, of course, a former U.S. president knows that advocating defunding the police is absolutely insane. What moderate voting bloc would ever get behind it? But, of course, the Dems’ radical base was allowed to think all summer “defunding the police” was necessary for the progressive future.

After all, many establishment Dems endorsed BLM and all its crazy Marxist dogmas. It sure mobilized plenty of voters this summer. Just ask the small business owners in Kenosha, Wisconsin.

Jezebel’s piece essentially asked Barry, “What gives?” and then began hitting him over his own “snappy” slogans in frustration for him not going full woke. The piece’s author, who inexplicably went by the name “Justice Namaste,” raked the former president over the coals, writing, "now we’re supposed to take unsolicited slogan edits from a man whose most memorable Presidential campaign slogans were the wildly creative zingers ‘Change’ and ‘Yes We Can’? Sounds pretty ‘snappy’ to me.”

Ouch, Barack, you really hurt some feelings here, it seems.

Obama’s dismissal of “defund the police” clearly felt like a betrayal for this partisan. After saying he felt as though the slogan turns off a “big audience the minute you say it, which makes it a lot less likely that you’re actually going to get the changes you want done,” Namaste accused Obama of flat out ignoring what Dem voters want: “Have none of the Democratic politicians disavowing slogans coined by prison abolitionists considered the possibility that the people calling for the police to be defunded.... actually want to defund the police?”

Dems were fine allowing their rabid base to go out and get pepper-sprayed and take a few rubber bullets to the groin just be told it was a hyperbolic slogan? We’d be mad, too.

Namaste concluded her grievance saying, “I know it might be unfamiliar to career politicians, but a lot of regular people actually advocate and protest for the specific changes they want, instead of developing a long term strategy that involves obscuring their goals for the sake of partisan posturing and bureaucratic niceties.”

You mean to say that Democrats whipped up their base, collected donations and then sold out? We’re not surprised. Though us conservatives are pretty annoyed, too. You mean to say, cities were destroyed by BLM and your de facto leader now claims that what inspired it was just a “snappy” slogan? Good to know former police captain David Dorn died for some pointless hysterics.