The World ‘Depends On It’: Eilish Gives Creepy DNC Speech Voting Out Trump 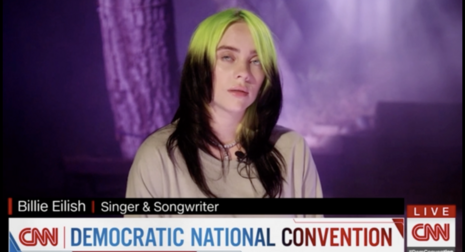 During Wednesday night’s thrilling and ecstasy-filled portion of the Democratic National Convention, Eilish was trotted out to encourage young voters to actually go out to the polls this year because otherwise the country is DOOMED. Yes, yes, tale as old as time and yet for some reason young people don’t ever turn out.

Anyways, because the DNC is the pinnacle of culture and politics, the 18 year-old singer gave a dire message about Trump’s plans for “destroying the country” and killing the planet and then performed her new song called “My Future.” The format is essentially the same as a Grammys award show. Annoying pop songs and a political lecture.

Eilish continued, asking for leaders who are focused on climate change and Chinese Virus. “We need leaders who will solve problems like climate change and Covid, not deny them,” she said forcefully. Though since when has Trump denied Covid? When he quipped that it “would disappear someday?” Though, did it not? Especially when George Floyd riots broke out and everyone and their mother locked arms against “systemic racism?”

And what? We are going to throw out the only administration willing to hold the Chinese Virus-spreading, Uighur-terrorizing communist Chinese government accountable because Trump refuses to wear a mask 24/7? The man gets monitored for the virus all the time.

It’s just more lecturing from a high-paid, insulated entertainer. She gets millions to talk about climate change at her concerts and whip up little girls into a hysteria about the world burning and the dolphins dying. She has even admitted that she feels guilty about the private jets. But she doesn’t have to stop because she has a dispensation as a Billboard top-charting artist.

Eilish asked for leaders who will “fight against systemic racism and inequality” saying that we can have them if we vote “for someone who understands how much is at stake. Someone who’s building a team who’s sharing our values.” Oh so Joe gets what at stake? The fact that he routinely talks about the demographic that complains about “systemic racism” as a single-minded group that will vote for him anyways merely because he’s a Democrat, means he really cares, right?

The singer concluded, “It starts with voting against Donald Trump and for Joe Biden. Silence is not an option and we cannot sit this one out. We all have to vote like our lives and the world depend on it. Because they do.” Yes, Trump has destroyed everything we’ve ever loved. That kind of fear and obsession should really compel Americans to make the right decision, right?