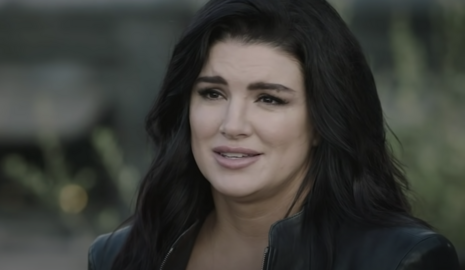 After posting what many sensitive, lefty Twitter users deemed a fascist, “racist” tweet, Carano, the actress behind Cara Dune in Disney’s The Mandalorian and a former mixed martial artist, didn’t do what most Hollywood stars do when confronted by social media. No, she didn’t grovel or profusely apologize on some critical race theory show trial disguised as a Hollywood actors’ roundtable, Carano told all the haters to get bent.

On August 2, the actress posted the iconic historical photo of the lone Third Reich-era German citizen who refused to join in on the crowd’s salute to Hitler because he was married to a Jewish woman. The powerful picture captures the lone man standing with his arms folded among a sea of enthusiastic people saluting the Fuhrer. In another post, the actress explained her shared photo, writing, “Heartbreaking and powerful story of a man who changed his ways for the woman he loved.. love changes the world, one person at a time.”

Of course, the lefty Twitter mob assumed that Carano was hinting at dissenting from the prevailing pro-BLM/anti-cop narrative that has been plastered all over social media by the far left’s useful idiots. Even though Carano’s post was about going against a racist WWII Germany, Twitter users (and bots) swarmed her, calling her “racist” and demanding that she start posting pro-Black Lives Matter sentiments on her page.

Another user demanded, “Do what we say and hate cops to prove you’re not a racist!” Touchy. Clearly, these people can’t stand when others think for themselves.

Though Gina heroically didn’t move an inch on her post, (well, it’s not like it was racist anyways) whereas most Hollywood types would bend the knee for things as dumb as their skin color. Carano hit back hard on August 3, tweeting that the mob were a bunch of “trolls” and “cowards,” and then posted a photo of actress Margot Robbie nonchalantly smoking a cigarette with the caption, “I’m glad you stopped following me. It’s like the trash took itself out.” 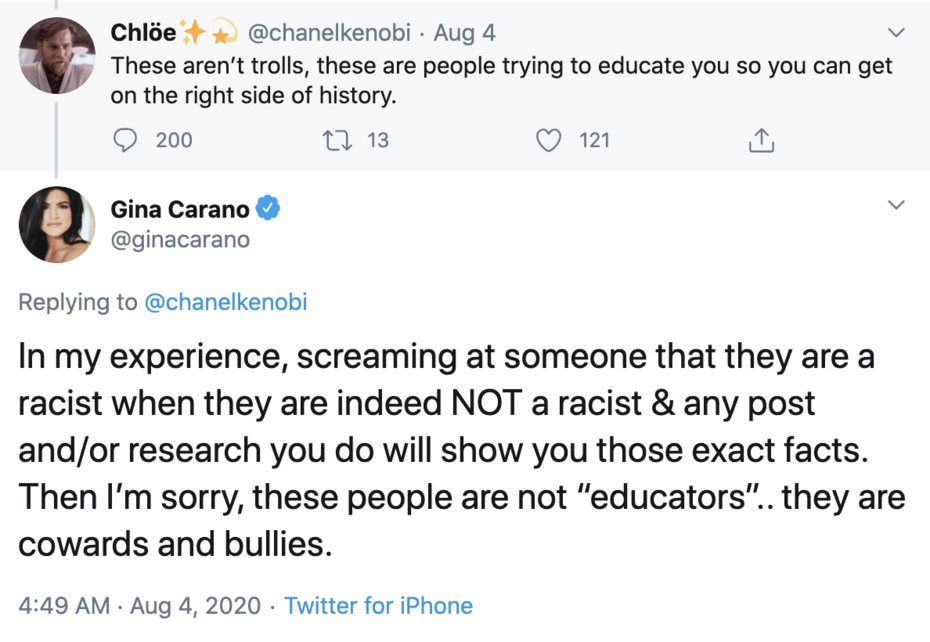 That prompted more ire from the mob. One user responded, “These aren’t trolls, these are people trying to educate you so you can get on the right side of history.” Carano took the time to reply, saying, “In my experience, screaming at someone that they are a racist when they are indeed NOT a racist & any post and/or research you do will show you those exact facts.”

The actress then scoffed at the idea that she was being educated, adding, “Then I’m sorry, these people are not ‘educators’.. they are cowards and bullies.”

Well played, Gina. You’re much braver than most of your Hollywood colleagues.