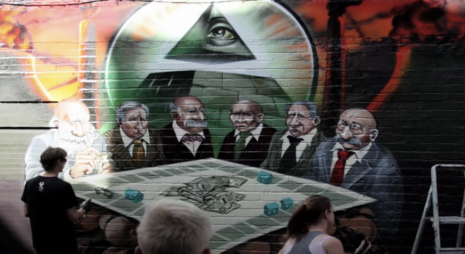 Entertainment industry idiots consistently undermine their political agendas with some of the dumbest statements and most flagrant shows of hypocrisy. Rapper Ice Cube thought he was doing a good job fighting against racism and police brutality the other day, until he kneecapped himself by posting an antisemitic image in the name of fighting racial injustice.

The N.W.A rapper-turned cuddly movie dad-turned paranoid schizophrenic – who wants the end of American police forces – tweeted an image taken from a controversial “anti-semitic” mural painted by Los Angeles artist “Mear One,” featuring wealthy, scheming Jewish-looking men casting lots and rolling dice on a board game held up by brown and black slaves. Of course, it’s your classic secret society imagery, complete with the all-seeing eye pyramid looming behind the figures.

Ice Cube’s photo was originally posted by online conspiracy group “Anonymous” and featured their own caption, “All we have to do is stand up and their little game is over.”

The rapper seemed to think this gross, conspiratorial art somehow represented current events concerning Black Lives Matter and its mortal enemy, the police. Cube captioned the photo, with his own statement: “FUCK THE NEW NORMAL UNTIL THEY FIX THE OLD NORMAL!”

But not everyone was on board with the “Straight Outta Compton” rapper’s post. Blue Checks like Twitter comedian Bridget Phetasy recognized the crazy when she saw it, responding to Cube’s post with an appropriate “Yikes.” Conservative Twitter user @neontaster commented, “Wow, with all that's going on in the world, I totally forgot you straight up hate Jews.”

Iraqi Journalist Rasha Al Aqeedi tweeted, “You're not helping. At all. Racism killed 6 million Jews. They aren't your enemy.” Washington Examiner reporter Siraj Hashmi responded to Cube’s post, tweeting, “So you decided to be anti-semitic…” Karen Pollock, chief executive of the Holocaust Memorial Trust, asked the rapper to “please delete this. It is a nasty antisemitic image. Many people have pointed this out to you.”

And Arsen Ostrovsky, an international human rights lawyer rebuked the rapper as well, tweeting, “the image you shared, even as cropped, is strongly Antisemitic. As a role model fighting racism today, would strongly urge you to please withdraw.”

Though it seems in this latest rendition of lefty protests, the ends justify the means. BLM wants their upheaval, whether their stats on police brutality or their conspiracies on who runs the world are inaccurate or not.