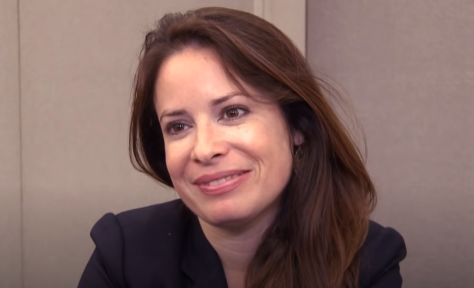 In an effort to deal with the tragic loss of her grandfather’s passing, one Hollywood actress is blasting Trump’s handling of the virus, insinuating that it killed her loved one.

Charmed and Pretty Little Liars actress Holly Marie Combs just suffered an undeniable tragedy, and in her grief went after President Trump on Twitter for contributing to her grandfather’s death from coronavirus. She put her grandfather’s death on “every lie” Trump muttered and called the world leader a “disgrace to the human race.”

After the president tweeted out another take down of the Democrat talking point that he had referred to the pandemic as a “hoax,” an aggrieved Combs responded with fury, saying that her Trump-supporting grandfather caught the coronavirus and died.

On April 27, Combs tweeted, “My grandfather died today. He voted for you. He believed you when you said this virus was no worse than the flu. He believed every lie you muttered and sputtered.” She added that “He died today from Covid-19 one day after his 66th wedding anniversary. You’re a disgrace to the human race.” 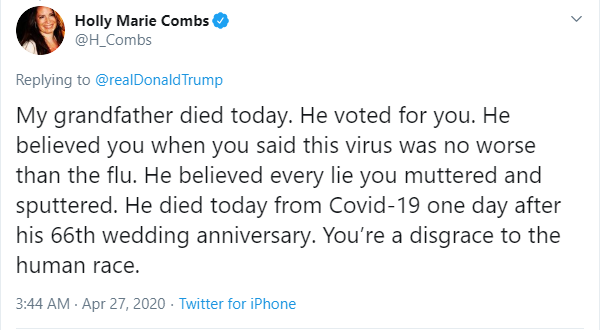 Combs never followed up with the specific move her grandfather made that exposed him to the virus. Perhaps, he just didn’t take the threat as seriously as he should have because Trump was optimistic about the virus two months ago.

Of course, it’s no secret that the left will do anything to turn this pandemic and its ensuing death toll into a blight on Donald Trump’s record. The latest lefty talking point is that Trump is to blame for more American deaths in a couple months than the number of Americans killed in the entirety of the Vietnam War. You don’t need to put on a thinking cap to see why that’s unfair.

Tragedy aside, Combs seems to be wielding her grandfather’s death against the president. From her subsequent tweets in that same Twitter thread, it’s clear she harbors no fondness for Trump nor his supporters.

When Trump supporters called her out for making the unfair claim, she dismissed them completely and alluded to them being diabolical. “Zero tolerance for Trumpers. Zero. Take it to someone else’s timeline. Not today Satan,” the actress tweeted.

Well, we’re glad that she had some affinity for her grandfather despite him being a “Trumper” as well. He must have been a great man to be able to outshine his political affiliations. Sorry for your loss, Ms. Combs.