Seinfeld Star: Trump Is ‘Most Despicable’ President EVER, ‘Thousands Will Die’ 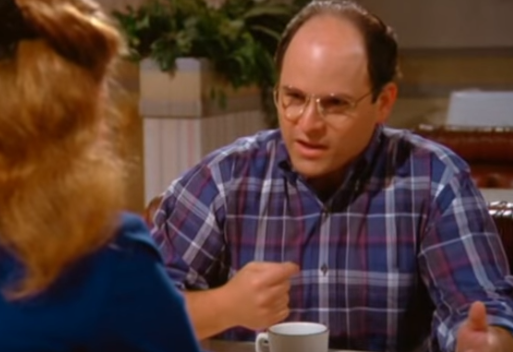 On April 2, the actor blasted the president as the “most despicable person” to ever have become president and insisted that Trump’s actions have directly resulted in the current death toll of those infected by the coronavirus.

Really though, if Jason could get away with it he’d probably make the point that all heart disease deaths between 2016 and today are Trump’s fault.

Alexander tweeted out a Huffington Post piece bashing Trump for telling hospitals that they should’ve been more prepared for the coronavirus pandemic. Regardless of people’s views on Trump’s pandemic response, there is a point to be made that perhaps not everyone should look to the feds to handle every unknown on planet earth. But since Alexander has been in full “Orange Man Bad” mode since 2016, he offered it as proof that Trump is the worst President EVER.

The actor captioned the post, writing, “This is the most despicable man to ever inhabit the Oval Office. Thousands will die needlessly for his arrogance and incompetence. And if this doesn’t prove it to you, nothing will. We must remove this horror from power asap.” 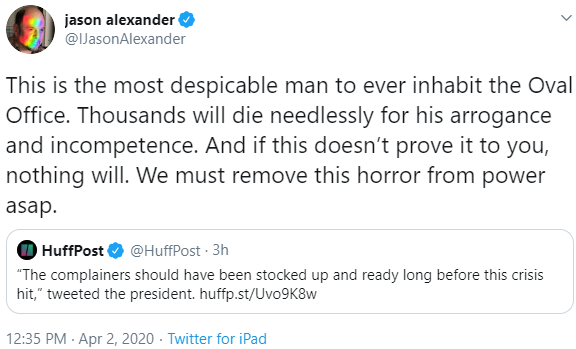 Oh wow, there’s an awful lot to unpack there. Worst president ever? Check. Blood on his hands? Check. Desperate plea to remove him again? Well Mr. Alexander can rest easy knowing that even more tax dollars are going to be used by Congress --no not for more Chinese virus prevention -- but for a “9/11 style” investigation into Trump’s handling of the virus led by Rep. Adam Schiff (D-CA).

Oh good, plague and an inquisition. Just like old times.

On March 24, Alexander composed a similarly deranged tweet about the President’s pandemic press conferences. He wrote, “There has never been a good reason to listen to or respect anything this man says. But this would be the worst time to start. Please, aid your social distancing by keeping him and his mouth as far from you and your loved ones as possible.”

Thanks for remaining calm and an embodiment of peace and strength throughout all this, Mr. Alexander.