The pressure of being quarantined in her luxury pad with her husband, singer John Legend, must have been too much for model Christine Teigen, because she started lashing out viciously on social media against First Lady Melania Trump. 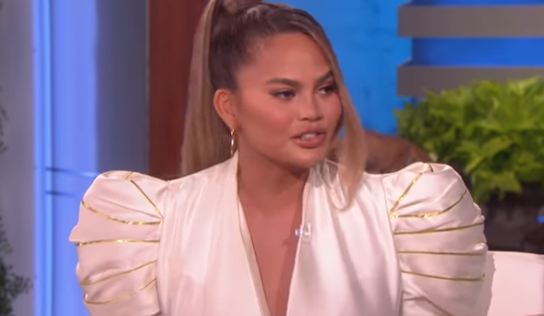 Teigen called the First Lady a “wife bot,” berated her to do “something” during the coronavirus crisis, made fun of some of her current White House projects and polished it all off with a nice “fuck you.” Alas, it’s just more proof that jealousy is a very ugly thing.

Teigen, who has considered herself a victim in her war of social media posts with President Trump, raged against his wife on the night of March 17, tweeting, “Has melania [sic] even thought about doing something with her be best shit during these times?” Oh, yes, another jerk tearing into Melania’s FLOTUS "Be Best" project. How original.

Teigen added, “I see regular ass awesome people on my timeline all day doing all they can to make people happy and this wifebot is working on whatever the fuck a tennis gazebo is.” Word on the street is that Melania takes her privacy seriously, and we can understand why when people go out of their way to bash her like this.

Teigen wasn’t done lashing out. She continued her insults, including the president in her next tweet. She wrote, “I expect Donald to be a do nothing fucking loser wimp but she could maybe possibly try to uhhh BE BETTER possibly the best be the best the best be best.” 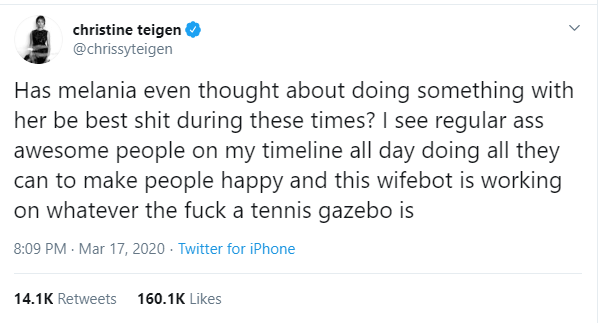 And still there was more garbage to be added. Chrissy blasted Melania “the bot” one last time on her 2019 White House Christmas decorations and fashion. “ALL I have seen this bot do is gently touch Christmas ornaments in a cape and stare in a cape and pat statues in a different cape and then change her cape into a rude ass jacket. Fuck you.”

Now, was it harsh that Donald Trump referred to Chrissy Teigen as John Legend’s “foul-mouthed wife?” Maybe. Was he wrong? Clearly not.

CNN reported on March 18 that the First Lady will be appearing in several White House-sponsored PSAs on the coronavirus in order to communicate “the most important ways Americans can protect themselves and those most at risk.” So, yes, she will be doing that, in addition to the gazebos, Christine. Feel free to voice your opinion.

A tweet from earlier in her evening proved that Chrissy may have been a little inebriated when she tore into Melania. “Fuck im so drunk from the streams and I have a Skype therapy session in 20 mins,” she tweeted an hour before the Melania tweets, referencing livestreams she and John Legend were putting online while they were drinking wine.

Remember, Teigen is one half of the couple that Vanity Fair called “a first family we could believe in.” Yeah, not so believable at times. #BeBest, Chrissy.