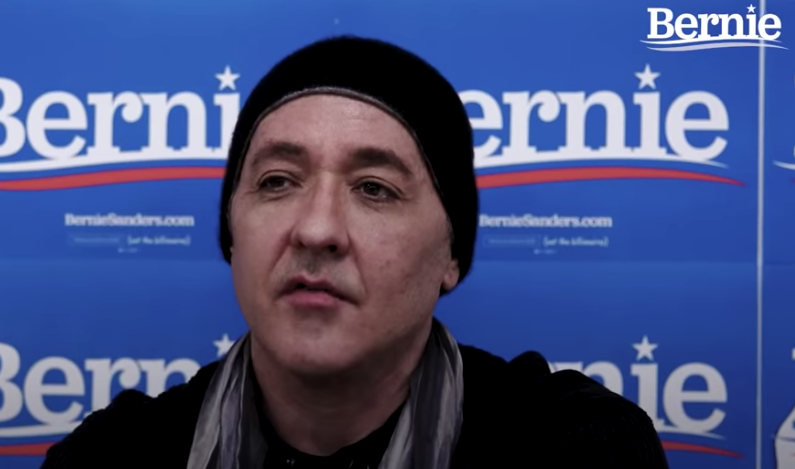 People in either Elizabeth Warren or Bernie Sander’s camp are all conservative-hating anti-middle class loons, but they refuse to recognize that about each other and team up to defeat the evil orange man. Even Hollywood's wokest are fighting a civil war and that means conservatives are grabbing the popcorn cause it’s quite a show watching the left implode.

Patricia Arquette and John Cusack, two of the most politically insane people in entertainment, had a squabble early Friday morning over Warren’s recent interview with Rachel Maddow in which the candidate blasted the Sanders’ campaign for failing to muzzle some of its most rabid supporters.

Arquette was all “you go, girl,” to which Cusack responded that Warren was full of it, explaining that this is just another attempt by the mainstream media to put a chink in Bernie’s armor.

Arquette began the debate by posting the segment of the Maddow interview in which Warren talked about her ideas on how to keep division and hatred out of political campaigns, something she claimed was part of the Sanders campaign. Arquette lauded the candidate, tweeting, “Elizabeth Warren even had a plan for how campaigns should proactively deal with online attacks - You should watch this.”

Cusack, one of Hollywood’s most vocal Bernie Bros, resented the claim, slamming Arquette’s talking point as “horsesshit.” He tweeted, “t’s been a full day talking point on msnbc. Complete horsesshit.”

Of course, Patty shot back with the patronizing question, “Why? Why is that a bad idea? How many disinformation sock puppets and Russian trolls are destroying your candidates chances right now?” Yes more of the “Russian trolls.” Though come on Patty, not everyone who aggressively disagrees online is a troll. Bernie bros are perfectly capable of being gross on their own.

Arquette then lamented, “God forbid someone stop this free for all fist fight.” 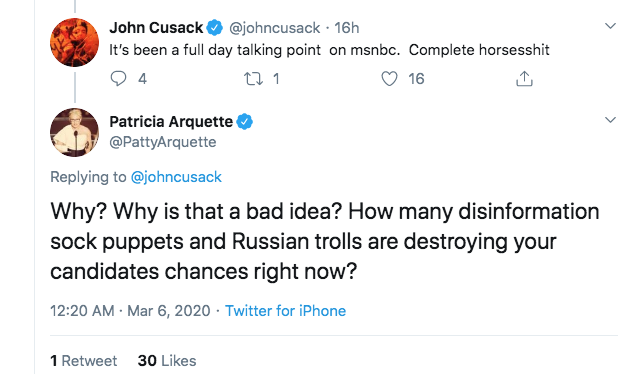 Cusack wasn’t buying Arquette’s attempts at reconciling the two candidates on her terms. He replied, “Oh my god - there no online every day pummeling of Sanders? It’s bernie who should discaplin [discipline] ‘his people’ because they - uniquely are the problem ? they are trolls- not campaign surrogates. double standard - it’s wrong.”

Despite how tough that is to decipher, Cusack has a point in distrusting Warren and Arquette’s claims regarding Bernie supporters’ behavior. If anything, Warren hit Sanders with a cheap shot when she accused him of telling her the country wasn’t ready for a woman president a month or so back. It was pretty clear that Warren had manufactured that claim to boost her own standing.

Cusack replied, “Except she & Maddow falsely suggest it flows in one direction - ‘bernie bro’s’ at warren ; this is utterly offensive due to mountains of abuse movemt gets - especially women of color -& no candidate can be responsible for trolls farms & bots. Margert Carlson on this bs earlier.” Frankly, Cusack’s right. Not only is Bernie not responsible for Russian bots, (if there really are many) but Warren can’t be trusted.

Arquette can’t complain about Sanders supporters calling Warren a snake if she’s a snake. And yes, he’s a commie. They’re both bad.