Every time the media get called out for their hateful rhetoric and smug disdain for common Americans, they double down on the despicable behavior.

When the president’s eldest daughter Ivanka Trump criticized CNN for their segment over the weekend featuring host Don Lemon and hacks Wajahat Ali and Rick Wilson making fun of Trump voters as “credulous boomer rubes,” figures in Hollywood and the mainstream media viciously attacked her.

White-haired Godzilla background actor Bradley Whitford took it personally that his CNN friends couldn’t get away with the mean-spirited clown show that was Saturday’s CNN Tonight With Don Lemon. The always-unhinged crackpot torched Ivanka, because her dad saying something unflattering of John McCain three years ago means she deserved it.

Whitford wrote, “Your father said John McCain wasn’t a war hero. Shut your con artist yap.” Oh, Bradley, who knew you were such a friend of the former Republican senator? Maybe he could’ve used a little more of your support in 2008. Also let’s not act like Whitford’s some paragon of decency. He’s one of the nastiest liberals on Twitter.

Charitable C-list comedian Michael Ian Black responded to Ivanka’s defense of Trump voters with a measured “fuck off.” The lefty Twitter user can’t stand Ivanka and his sneering paragraph proved it. He tweeted, “Ah yes, Ivanka, purveyor of Waffle House and Wal-Mart, patron saint of the strip mall, muse of the misbegotten and dispossessed.” Not to mention this is who he thinks Trump voters are.

Black added, “Champion of the downtrodden, she who provides succor to those living paycheck to paycheck, who tends their wounds and knows their miseries. Fuck off.”

Former Star Trek actor George Takei managed an “I know you are but what am I?” retort, tweeting, “Right-wing millionaires and billionaires who rail about the cultural elite are just as elite but generally much stupider.” 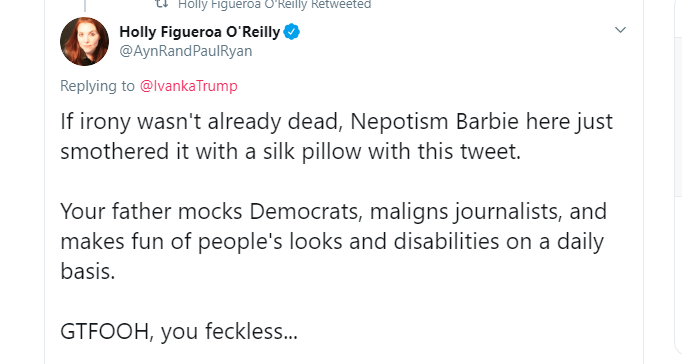 Moving on to unhinged media feminists, songwriter Holly Figeueroa O’Reilly went after “Nepotism Barbie.” She spat, “ If irony wasn't already dead, Nepotism Barbie here just smothered it with a silk pillow with this tweet. Your father mocks Democrats, maligns journalists, and makes fun of people's looks and disabilities on a daily basis.”

Flashing that class the left is so famous for, O’Reilly told her to “GTFOOH (Get the fuck out of here,) you feckless…” an endearing reference to Comedy Central’ Sam Bee calling Ivanka a “feckless c*nt” back in 2018.

Sorry, our mistake. You guys are totally fair and not snide or obnoxious in any way.