“Pete Buttigieg is having his Vogue moment,” began a Style section article by Washington Post fashion writer Robin Givhan. It’s the latest attempt by progressive media to force the transformation of the boyish and soft-spoken left-wing candidate into a pop culture phenomenon. On the paper’s May 1 Style front page, Buttigieg’s smoldering black-and-white Vogue photoshoot image stood out, accompanied by Givhan’s lusty sales pitch for this sexed-up version of the gay South Bend mayor. 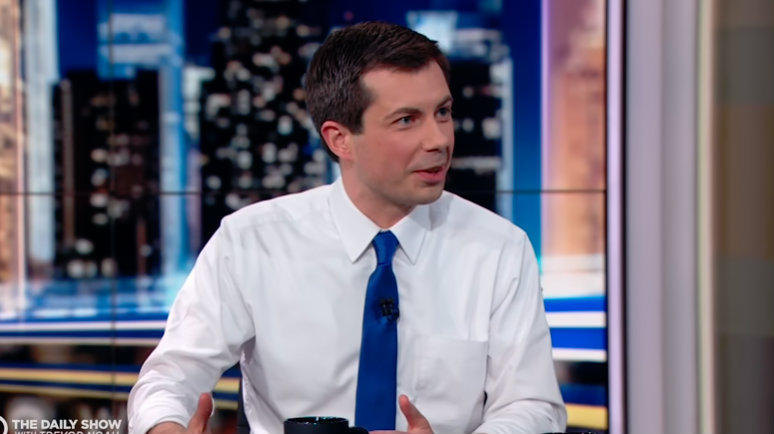 Givhan was absolutely smitten with Mayor Pete and his posing in Vogue. “The 37-year-old presidential candidate is featured in the June issue of the fashion magazine and looks quite good.” Yeah, the Geek Squad guy is bringin’ sexy back.

Givhan told readers this shoot was about the “beauty of Buttigieg’s public wardrobe” is so “perfectly bland that it roars regular guy.” And, Robin, when you’re right, you’re right.

The primary picture Givhan referred to was a smoldering image of Buttigeig tying his tie. The photo, she said, “puts a gloss of sex appeal on his policy wonk ensemble.”

But remember, “he doesn’t need the patina of glamour, but it doesn’t hurt.” True, that Enterprise Rental counter guy-look can stand on its own without tarting up from Vogue, but Buttigeig’s a presidential candidate now. He’s national. So “swing, baby!”

Yeah, playing along with Givhan requires a suspension of disbelief. But sexing up lefties is what WashPost Style section is for, and it isn’t often that it gets to hype a gay small-town mayor with exquisitely progressive policy positions. We can forgive them for trying too hard.