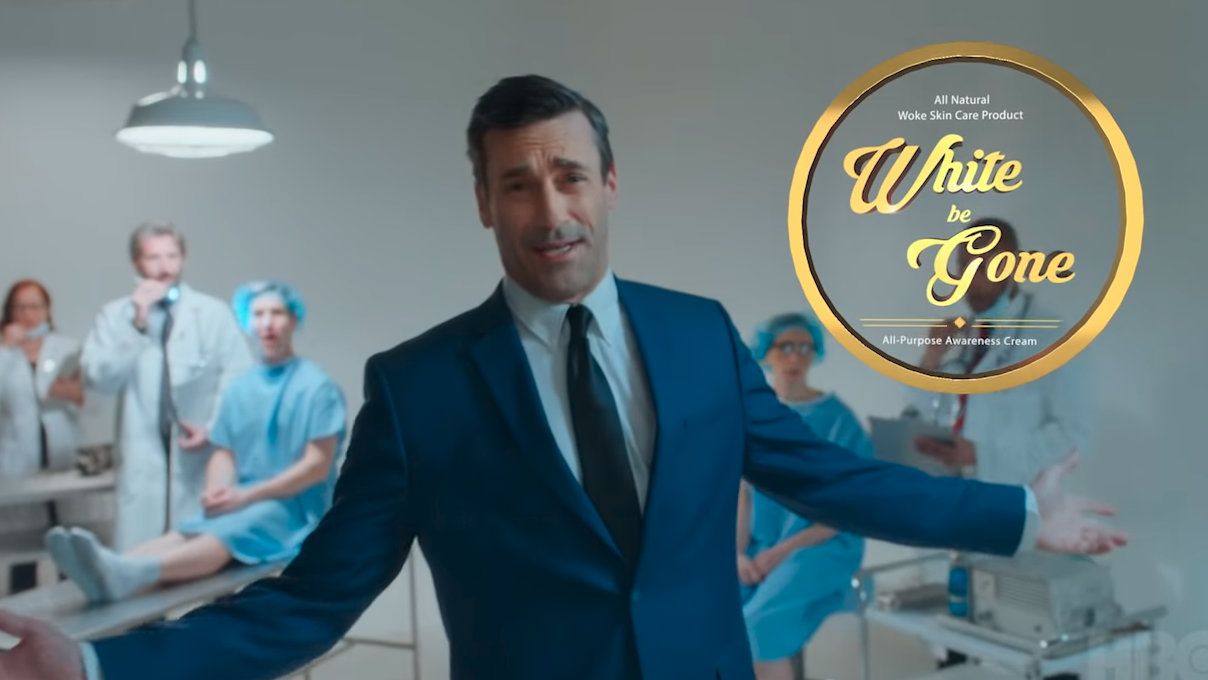 “White-Be-Gone?” Oh man, this really must be some cutting-edge humor. Something someone like director Spike Lee would just adore. Random Acts of Flyness devoted six minutes to the segment in which Mad Men star Jon Hamm hawked the topical cure for “whiteness.”

Jon Hamm began the segment sitting in his living room, watching shield-bearing policemen in a violent stand-off with black protestors on his television set. From the background, his salesman doppelganger asked the audience, “Do you suffer from white thoughts? White thoughts are a symptom of an aggressive disease called acute viral perceptive albinitis, or whiteness.”

To illustrate the point, Hamm’s character appeared disturbed by what he was seeing on the television, and the audience was given a visual aid into what he was thinking. A thought cloud appeared above his head with the question, “Shouldn’t all lives matter?” No, no, whitey. That was the wrong thing to ask. The salesman version of Hamm then walked in and rubbed black “White-Be-Gone” lotion on the man’s temples. Immediately, he began to lose symptoms of his inherent racism.

Salesman Hamm continued by describing the way the “whiteness” virus infiltrates and corrupts healthy diverse thoughts and opinions. He stated:

The whiteness virus targets healthy, culturally, and ethnically specific cells: Italian, Irish, Scandinavian, etc., and what have you. The albinitis then attacks and destroys any cultural or ethnic specificities using an arsenal of fake holidays, [depiction of Thanksgiving] seventeenth-century aristocratic class warfare, the one-drop rule, and Elvis.

Jon Hamm’s character then moved to a more somber mood, and contemplated how, before “White-Be-Gone,” he also suffered from “albinitis.” Joined by an all-black Gospel choir, singing the phrase “White Thoughts,” Hamm recounted the time he advised a female muslim friend to remove her burqa if she didn’t want to be harassed by TSA. He claimed, “And I, in the throes of my albinitis, suggested that she refrain from wearing her headscarf, so as not to inconvenience the airport security.”

“You see I know from firsthand experience, that to be plagued by white thoughts can be deceptively euphoric, because it gives victims of whiteness a profound sense of identity and purpose, as well as an unbridled populist, political power.”

Hamm then went on to argue that any white person watching this infomercial and rationalizing that this didn’t apply to them has been suffering from the subtle, diverse attacks of albinitis all the same. Hamm claimed, “‘I’m not racist,’ spoken aloud, is a classic white thought… We must remain vigilant, and remember that all these white thoughts stem from the same virus, and thus are all the same shit.”

So the message, ahem, the joke is, to all white people, please buy a bottle of “White-Be-Gone,” because no matter how you want to look at it, the fact that you are white makes you a bigot.