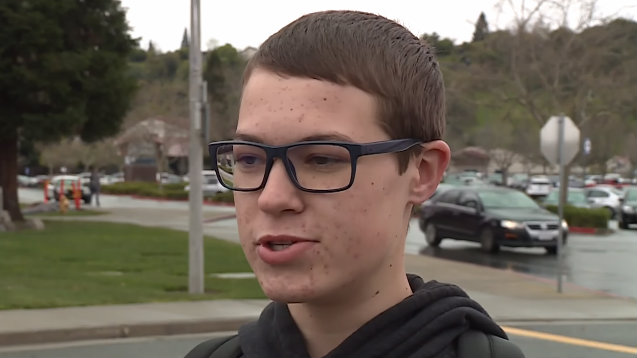 Students at a California high school are hoping to inspire another national walkout day – but this time for the pro-life cause. Not gun control. While hopeful, some students are concerned about a double standard on what issues are socially acceptable for the now-popular school walkout. Considering that no major liberal media outlets are circulating their campaign, maybe they’re onto something.

But conservative media, like Fox News, are paying attention. A junior, Brandon Gillespie is the student organizer of Rocklin High School’s April 11th walkout. He has the support of classmates and several administration members of the Sacramento, California school for his effort to memorialize the countless unborn lives lost to abortion. The Daily Signal reported Monday that Brandon “wants to help spread the pro-life message and question the easy availability of abortion” through his walkout.”

Gillespie and his peers also have another interest: to see if a non-progressive peaceful protest can achieve national acceptance, or show the double standard by which liberal movements are propped up above all others. He was motivated by the recent ousting of a less-than-indoctrinated faculty member, who discussed this particular double standard with her students in the build up to the progressive March for Our Lives.

Juliene Benzel, Gillespie’s history teacher “was placed on paid administrative leave for questioning, after a national gun-control student walkout March 14, whether Rocklin High also would allow a pro-life walkout by students.” A CBS local affiliate reported Benzel saying that “the school disagreed with her views and told her to stay home Wednesday morning [March 14].”

She insisted that in no way did she discourage any student from participating in the gun-control walkout. Appearing on Fox & Friends days later, Benzel again suggested a double standard.

“If schools, not only just our school and our administration, but across the country, are going to allow one group of students to get up during class and walkout to protest one issue,” she asked the hosts, “would they still give the same courtesy to another group of students who wanted to protest… abortion?”

Benzel and several of her students say there should be a bigger national conservation, not only for gun rights, but also for free speech rights. If people have the go-ahead to walk out of school for gun control, then it’s only right that other issues, such as abortion can get sanctioned walkout days as well.

As Nick Wade, another of Benzel’s students, put it, “if we were to go to school and say something like, ‘I want to walk out, maybe for abortion rights,’ then you know they probably wouldn’t let us, because that’s more of a conservative push.”
It’s not hard to agree with these Rocklin High members, considering that the media consistently downplay well-organized, high-profile events such as the pro-life March for Life. It wouldn’t be surprising if media treat this pro-life walkout in the opposite manner of how they treated the hyped-up, pro-liberal March for Our Lives.