The latest episode of ABC’s Designated Survivor made it abundantly clear that the conspiracy element of this show is merely a thin patina of intrigue allowing the writers to wipe away Republican congressional majorities and fantasize about the “progress” they could be making in the wake of a massive crisis. The April 12 episode doubled down on last week’s anti-gun rhetoric, mentioning “background checks” once every 3.8 minutes.

The episode is filled with clichés, most notably that Republicans need to “put country above party” and vote for a gun control bill that everyone involved—even the supporters—admits is severely flawed, just so the House can fix it. (The last time the Senate did that, it was to force ObamaCare down the throats of Americans). It’s amazing how putting “country above party” always seems to mean voting for bills Democrats want. Despite the episode’s singular focus on background checks, the writers make several key errors that expose their ignorance.

About halfway through the episode, there is a short scene as the First Lady leaves a meeting with Senator Hunter about “gun trafficking.”

Kirkman: Thank you so much, Senator, for seeing me.

Hunter: Thank you for reaching out.

Kirkman: Well, I made a promise to Amara Qazi, and she came to the roundtable yesterday. Her 12-year-old grandson was killed in a drive-by shooting in Chicago.

Kirkman: Yeah. Without a specific law targeting gun trafficking, we're not giving law enforcement a fighting chance to stop the flood of weapons coming into cities like Chicago.

Hunter: You are preaching to the choir, Mrs. Kirkman. You know, I championed this effort in Massachusetts, and I would be glad to lead the charge here, if and when we have the momentum.

Hunter: And in the meantime, let me say... I am glad to have a sister-in-arms in the White House.

Kirkman: Well, thank you. And thank you so much for your support with this vote.

Hunter: I hope we'll all be celebrating tomorrow.

Kirkman’s assertion, lifted straight from former President Barack Obama’s own demagoguery, is entirely without merit. Current law provides numerous avenues to charge gun traffickers. For starters, “[u]nder federal law, any person who engages in the business of dealing in firearms must be licensed.” In other words, it is already a crime to deal firearms without a license. What, exactly, does First Lady Kirkman think gun traffickers are doing? Straw purchases, when someone purchases a firearm on another’s behalf, are also already illegal. But wait, there’s more. It’s already illegal to transfer a firearm to someone you have reasonable cause to believe is prohibited from possessing firearms, and it is illegal to conduct a so-called private sale across state lines. That’s quite a few tools law enforcement already has to combat gun trafficking without new legislation. 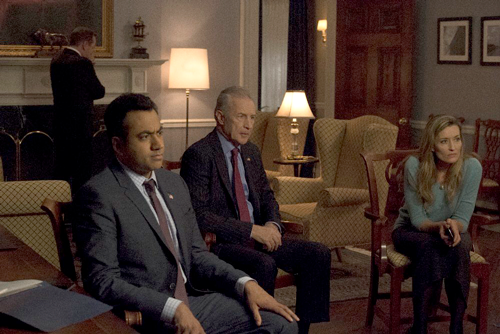 Later in the episode, First Lady Kirkman again reveals her ignorance, telling Senator Bowman, “It shouldn't be good luck that keeps people safe in a movie theater or a mall or a school. This is about doing what's right, and I just hope that 51 Senators can feel the same way.” She’s right. It shouldn’t be about luck, but movie theaters, malls, and schools are commonly “gun-free zones” that force Americans to rely on luck because they are denied their right to self-defense.

There are other errors, and a scene depicting the junior Senator from Colorado being bought off with a guarantee of $785 million in infrastructure spending. This blatant bribe is reminiscent of the Cornhusker Kickback used to buy Nebraska Senator Ben Nelson’s Obamacare vote and the $4.3 billion New Louisiana Purchase that secured Mary Landrieu’s vote, among other backroom deals. The entire Congress may have been wiped out in a terrorist attack, but its worst tendencies survived.

The writers could have cut their losses and killed this storyline by letting the bill fail, but instead, they decided to dig deeper. The bill passed 51 to 49 and is now headed to the fictional House of Representatives where this inane politicking could persist through the remainder of the series. In the meantime, a massive, violent, terrorist conspiracy remains perpetually on the backburner. It’s good to know the new president has his priorities straight.