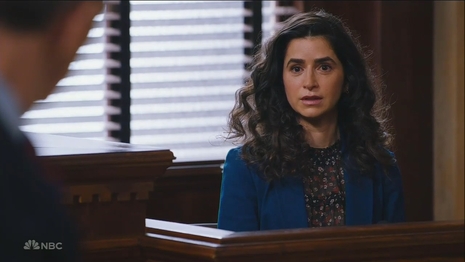 The Biden administration's immigration policies have led to disaster on America's southern border, but on NBC's Law and Order the real problem is a border state governor busing illegals to New York City.

On Thursday's episode, "Land of Opportunity," a Venezuelan illegal immigrant is killed in a murder-for-hire by a wealthy CEO covering up crimes at his construction site.

Early in the episode, Detectives Cosgrove (Jeffrey Donovan) and Shaw (Mehcad Brooks) interview a staff member at the shelter where the illegal was living. The staffer gives them an earful blaming the Texas governor for the victim's struggles in New York City.

Shelter Employee: Both dead. They were killed by police in Venezuela at a protest against the country's political corruption.

Shaw: The situation is really bad down there.

Shelter Employee: Luis's parents told him that America was different, the land of opportunity. He believed it too.

Shelter Employee: Work here for a week and then talk to me. It took Luis months to make his way up through Mexico. Then he finally crosses the border in Texas only to be packed onto a Greyhound and shipped 3,000 miles away by a governor looking to make headlines.

Cosgrove: He was on one of the migrant buses?

Shaw: I think he would have been better off here than Texas.

Shelter Employee: Not so much. I mean, Luis was on the first bus to arrive in the city. The mayor's there, greets them, shakes their hands. Says they'll all be taken care of.

Shelter Employee: [Laughs] Not even a little. Mayor got his photo op, but then the buses kept coming and the city never came up with a plan.

Like most network dramas, the illegal immigrant characters are all saintly. In contrast, a nasty "bad white male" caricature is shown at the beginning of the episode abusing them in the street.

Detective Shaw sums up the show's point of view in a conversation with his partner.

It is true that migrants who enter the United States through illegal border crossings place themselves in a precarious position. This is why they should be discouraged from attempting it in the first place. Maybe building a wall could act as a deterrent!

None of those issues are addressed. Instead, Texas is the bogeyman despite the fact that the state is far more flooded by the border crisis than New York City.

The episode does have a couple of brief moments of surprising honesty. When the detectives interrogate the murder victim's friend, the dialogue veers into the effect on wages of hiring illegals.

Friend: The foreman down there, he likes hiring guys on the fringe, you know? Illegals, deadbeats. They pay us in cash. No union rules.

Friend: Exactly. Pennies on the dollar for the same damn work.

"She attempted to circumvent the law. It's not up to us to shield her from the consequences of that," he says.

One cannot help but wonder sometimes if television writers think immigration enforcement should even exist. Is a nation not supposed to have laws governing who may enter?

If it weren't for Hollywood's left-wing bias, a compelling drama could be made about the brave work of immigration enforcement and their fight against the drug cartels and sex traffickers harming our nation.

Unfortunately, Hollywood is too busy pushing open borders propaganda and attacking anyone who resists it.