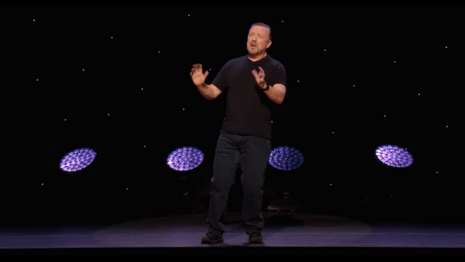 Ricky Gervais' is one of those rare left-of-center comedians who revels in mocking woke cancel culture and elite arrogance. In SuperNature, his new Netflix comedy special released on Tuesday, he makes sure to offend everyone left, right or center in pursuit of constructing actually funny jokes.

Some of the jokes work, some don't, but none tiptoe around anyone's feelings, no matter how sensitive the subject. There are no "safe spaces" in a Ricky Gervais show.

Straight out of the gate in the opening minutes, the comedian offends feminists by making jokes about a lack of good female comedians. He tries to think of a funny living female comedian and comes up with....Dame Edna Everage, a legendary British character performed by a man.

He soon segways into the topic that's currently unleashing the most left-wing hate against him - transgenderism.

"They are ladies. Look at their pronouns."

"What about this person isn't a lady?"

"Her penis, you fucking bigot!"

"What if she rapes you? You fucking TERF [Trans Exclusionary Radical Feminist] whore!"

Gervais returns to the trans topic again later in a hilarious NSFW portion of the show where he imagines himself as a trans male-to-female taking a lesbian home for sex.

He takes real risks with these moments. Dave Chappelle was recently attacked on stage by a man who said he targeted the comedian for his LGBT jokes.

Gay Inc. has reacted angrily to Gervais' special. The Gay and Lesbian Alliance Against Defamation (GLAAD) called it "dangerous" and Pink News labeled it an "anti-trans garbage fire."

During the special, Gervais alludes to tranny anger over his comedy.

"I talk about AIDS, famine, cancer, the Holocaust, rape, pedophilia, but the one thing you mustn't joke about is identity politics," the 60-year-old said. "The one thing you should never joke about is the trans issue. 'They just wanna be treated equally.' I agree. That's why I include them."

"I think whereas people are now trying to be so politically correct, they're trying to out-woke each other," he tells the audience. "Soon someone'll say, 'You can't say 'pedo' anymore. It's a derogatory term. It offends people who are child-addicted,' right?"

Notably, SuperNature also targets conservatives, such as when Gervais brings up the issue of abortion. After repeatedly touting the wonders of nature, Gervais is surprisingly cavalier about the anti-nature practice of killing unborn life.

He decries what he calls "this propaganda machine that goes, 'Liberals, they're aborting babies at nine months, pulling them out of the vagina, liquidizing them.' Like, crazy conspiracy theory, right?"

Partial-birth abortion and other late-term abortions aren't conspiracy theories. It may shock Europeans, but in the United States Roe v. Wade allows abortion up to birth. Perhaps Gervais should learn about Kermit Gosnell or Planned Parenthood's baby parts business in the U.S.

As an atheist, Gervais also likes to skewer religious believers. His routine includes mockery of Christians, Muslims and even Hindus (there is a snippet about reincarnation). No religion is off-limits.

"A working class kid on an estate in Reading, you don't hug people," Gervais said, referencing his working-class childhood to explain his comedic worldview. "You don't hug your fucking dad, granddad, or your brother. You wind 'em up. You take the piss. That's our hug, right?"

Netflix recently sent a memo to its woke employees telling them they need to accept the fact that Netflix will sometimes premier content they find offensive. Ricky Gervais' SuperNature may be the first big test of that principle.