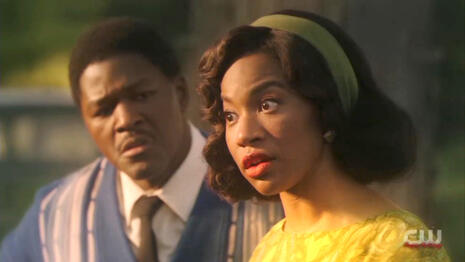 Since the rise of Black Lives Matter, Hollywood has been trying to rehabilitate the historical reputation of the Black Panthers, a Marxist-Leninist movement that advocated violent revolution. The CW's woke sci-fi reboot 4400 is the latest television show to celebrate the history of this domestic terrorist organization.

4400 is about a group of men and women from different eras who mysteriously find themselves beamed into the year 2021. The episode, "Empowered Women Empower Women," on Monday, December 6, focuses on the backstory of Claudette Williams (Jaye Ladymore), a preacher's wife and active participant of the Civil Rights movement in the 1950s.

Having arrived in 2021, Claudette has taken a job at a bar where an arrogant and bigoted white male named Barney (Stef Tovar) is the bartender (many of the white men in the show are nasty). Claudette's friend, Mrs. Grover (Adilah Barnes) brings her clippings about an old friend from the past named Barb who went onto become a leader in the militant Black Panthers. Claudette approves of what her friend did. The scene flashes back to the 1950s and shows Claudette urging her abusive preacher husband Jimmy and fellow activists to change to violent tactics.

Claudette: Look at my girl. "She went on to become a leader in the Black Panther organization, believing, 'We stood by too many years hands behind our backs to give them peace. But we learned...'" (voice breaking): "'...Only revolution will guarantee the peace black folk deserve.'"

Mrs. Grover: You know what has changed? In today's movement, women's voices are not only heard but followed. Not as much as they should be, but certainly more than in your time. I wonder what Barb would think of Barney.

Claudette: Yeah, Barb knew there were a lot of Barneys rotting this country from the inside out.

Mrs. Grover: What do you think Barb would do if she knew how high up the ladder today's Barneys have climbed?

Claudette: Sitting all high and mighty in such powerful positions. Mm-hmm.

Jimmy: All right, listen up. Hey. I have seen the photos of our sisters and brothers up close. Which is why we are coming to their front steps.

Jimmy: We will bring our message to the Klan's headquarters. (All exclaim)

Claudette: And sit like we always do? Little sitting ducks just waiting to be killed. What if we make this personal and strike at the heart of the monster?

Claudette: I'm not talking no sit-in. We bomb that white devil's house. And nobody has to be there. Nobody has to get hurt. But we show him and his family what it feels like to be terrorized and what we are capable of.

Bobby: It ain't a half bad idea. Other organizations have been striking back.

Bobby: Heard there's been some success.

Claudette: There has. There has, Jimmy.

Jimmy: Y'all have to excuse my passionate wife talking out of turn. Brothers, you know we can't fight fire with fire. We must oblige to what our Lord asks. Matthew 5:38-40. "But I tell you, "Do not resist an evil person. If anyone slaps you on the right cheek, turn to them the other cheek, also."

Notice how the scene insipidly portrays sit-ins as the organizing method of the negative character (the abusive husband). Sit-ins ultimately helped lead to the desegregation of the American South, yet the noble heroine dismisses sit-ins as useless and wants to resort to bombing instead. The Black Panther movement is promoted as a superior movement to the peaceful (and also highly effective) Civil Rights movement of the 1950s and 1960s led by Rev. Martin Luther King, Jr. The Black Panthers engaged in assassinations, torture and killings (including of their own members).

The dialogue about "women's voices" is likely a reference to the female Marxist-trained leaders of BLM who also advocate violent revolution. To such Marxist revolutionaries, the successful non-violent protest movement of the Civil Rights era is a rebuke to their tactics. Therefore, they must tear it down and rewrite its history.

Cable is dying and reboots are a dime a dozen, but shows like this are still reflective of the larger "narrative" the left is desperate to promote. 4400 is only the latest television show to promote the Black Panthers and it will not be the last.

This rant was brought to viewers in part by Old Navy, Progressive and Subaru. You can fight back by letting these advertisers know what you think of them sponsoring such content.