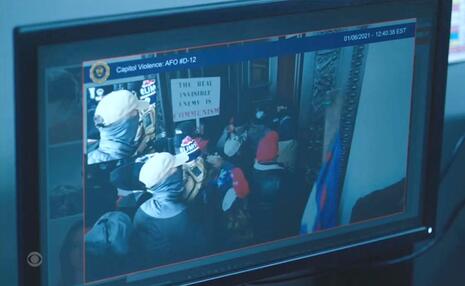 In the episode, "Patriots," on Tuesday, September 28, a poor-looking white man shoots a female concierge named Callie (Morgan Lennon) point-blank in a DC hotel along with other bystanders in the lobby. It turns out the concierge is the daughter of a police officer injured in the Capitol Hill riot.

(Hollywood is back to caring about police officers injured in riots. If only they had shown such concern last season when every television episode vilified cops, ignored assaults on officers, and glorified violent BLM and Antifa protesters.)

After getting the murder case, FBI Agents Jess (Julian McMahon), Sheryll (Roxy Sternberg), Kristin (Alexa Davalos) and Ortiz (Miguel Gomez) look at footage of the Capitol Hill riot and talk about how they felt that day.

Jess LaCroix: It's easy to forget what we all witnessed that day.

Sheryll: Or what we pretend never happened.

Actually, the FBI has focused intensely on January 6th, as has the legacy media. The protests that the establishment media like to "pretend never happened" are "peaceful" BLM/Antifa riots of 2020 that led to months of violence, death and injury. The double standard is frustrating to say the least.

The agents get into Callie's phone and discover she was researching J6 names on the FBI website.

Kristen: We got into Callie's phone. Texts, emails, search history. Check this out. She spent a ton of time on the FBI website, the Capitol Violence tab in particular.

Jess: January 6th, the day her father was injured.

Sheryll: What was she looking at specifically?

According to the episode, the new threat is apparently military veterans who live in red states or counties.

When Jess and Sheryll go to FBI headquarters in Washington, D.C. to discuss a file on men Callie IDed from the January 6th fugitive pages, the agents make clear who Americans should fear.

Jess: Was there any prior connection between Callie and the three men she id'd?

Agent: None that I could see. Bill Kominsky, an electrician from Erie, Pennsylvania. Rank and file Proud Boy. Evan Graham, Proud Boys-adjacent, also from Erie. The big fish was Milton Krabbe, highly influential in the Three Percenters militia group. We have him here in custody.

Sheryll: A lot of these guys are ex-military.

Agent: Krabbe served in Afghanistan and the Ohio National Guard. We trust these guys to keep us safe. Now they want to start a civil war and overthrow our government.

Jess: Trained to kill and hiding in plain sight.

Agent: And doing what all insurgents do after a setback-- reconstitute, recruit, re-arm. If one of those three put a hit out on Callie, Krabbe's the top of my list.

The shooter ends up being a man named Travis Baker, a Marine who served in the same company as Krabbe. Travis, his brother Cole and sister-in-law Jolene, who live in West Virginia, all played a role in Callie's death. (The writers are so clichéd they named the wife living in Appalachia after a Dolly Parton song.)

It turns out an employee in the FBI's National Threat Operations Center in Clarksburg, West Virginia, had let Jolene Baker know about the tip from the concierge. "Those people were supporting our president," the NTOC explains and later adds apologetically, "I thought these people were patriotic Americans."

As the agents continue their search for the shooters in West Virginia, Kristin says the entire state should not be trusted. "It's not just law enforcement we can't trust. This part of the country's blood red." So, now a state that voted Republican is not just red, it is "blood red." Wow.

The Bureau is also "picking up a lot of nasty chatter about the Virginia attorney general" who certified that state's election results and worries "she's the Baker's next target."

"Like the kidnapping plot against the Michigan governor," Kristen says. The episode left out the part about FBI agents being the primary plotters in that case. Come to think of it, the episode leaves out the fact that FBI informants were at the January 6th protest, too.

The episode also pushes the debunked idea that January 6th was a pre-planned event organized by thousands. "You had 2,000 men and couldn't take the Capitol," Jolene says accusingly. "Because they had the guns that day," Travis replies.

The episode is so excessive in pushing the "dangerous insurrectionists" narrative you almost want to offer the writers a tranquilizer. It must be hard to sustain this level of delusional hysteria for an hour. In the eyes of Hollywood, dangerous hillbilly Trump supporters are around every corner.

This rant was brought to viewers in part by Botox Cosmetic, Lexus and Terry for Virginia. You can fight back by letting these advertisers know what you think of them sponsoring such content.