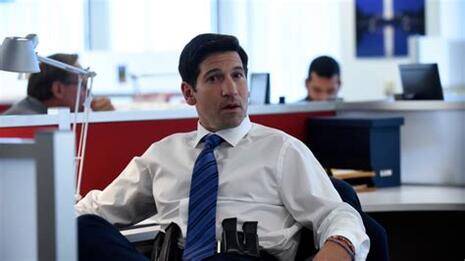 “Moment of Silence” was the second of two episodes the new series premiered on Thursday, September 16, and far darker than the first.

After losing his 5-year-old daughter in a school shooting, Chase Milbrandt (Jon Bernthal of The Punisher fame) seeks out a job in PR for the National Gun Lobby, an organization that's obviously supposed to be the NRA. The group is happy to have him on their team since they feel his support for the Second Amendment further bolsters their cause and even ask him to lead a live online moment of silence on the first anniversary of the school shooting that took his daughter.

Since numerous real-life parents who lost children to school shootings support the Second Amendment, the idea that a grieving father would join the group as an advocate is less of a reach than Hollywood might think. You also get the feeling that the typical pro-gun paraphernalia in the office that any conservative would be comfortable with – a poster of bullets colored to look like the American flag, a coffee mug with all kinds of rifles on it – is supposed to seem sinister.

Chase meets with Trish (Amy Landecker) in NGL's public relations to discuss communications strategy. At first, Chase offers the best arguments for gun rights, then when Trish asks him to make the case for the other side, things take a turn.

Chase: The more guns you have, the more gun deaths you have. Everywhere in the world it's a one for one correlation. The closer a gun is to your loved one the more their life is in danger, period. That is a fact. You'd think if an object where that directly tied to the deaths of innocent people that we wouldn't debate it. You know something? You'd be half right, it's not debated. It's ignored.

Trish: And if I argued back about other causes, the influence of violence in mass media, mental health.

Chase: I'd say those aren't arguments, those are distractions. Proven by the fact that in the aftermath of a mass shooting, the people that make those arguments they never actually pursue them. Look I play violent video games. Am I a threat? My daughter was taken from me, so am I in a sane state of mind?

Chase: Far more people in this country like ice cream than guns, correct? But what if people used ice cream to violently kill over 30,000 innocent Americans each year? I guarantee we’d shut down every Dairy Queen in the country, we'd do it overnight. You know something? It would be easy. Why? There's no National Ice Cream Lobby.

Here we are at the NGL itself, right? The ground zero of the Second Amendment. We have a total open carry policy throughout this building. We have armed guards at the front door. There is a gun range in the basement. If we believe our own hype, we're in the safest place on Earth, right? What's to stop a madman? Someone determined in making a statement, someone with nothing to lose, to infiltrate this office and just shoot up the place. Think about it. Take out the headquarters and the entire enterprise goes crumbling. You’re just one determined person away, aren't you?

That’s what folks in the industry call foreshadowing.

As the episode progresses, it becomes clear Chase is still traumatized by the loss of his child and has not sought out vitally needed mental health treatment. He begins acting odd around the office, increasing the number of guns he carries with him into the building.

In a particularly nuanced scene, an elderly Vietnam Vet and proud gun owner, William (beautifully acted by Beau Bridges), recognizes that Chase is showing signs of untreated PTSD and could be a danger to himself or others. He tells his son, Aaron (Boyd Holbrook), who works at NGL and has befriended Chase.

Aaron realizes something is off as the day of the moment of silence approaches. He asks how Chase is feeling about it. "It's all I'm thinking about," Chase replies. "All I've been doing is preparing for this, OK?" Aaron encourages Chase to take a day off instead of leading the moment of silence, but Chase insists it's his plan and suggests Aaron be the one to not show up at work that day instead.

Aaron finally convinces Chase to skip work and go up to the mountains with him, but when he doesn't come to his house at the agreed upon time, Aaron rushes into work to find Chase ready for the moment of silence with a heavy bag by his desk. At this point, Aaron assumes Chase is planning a mass shooting at NGL. In the final scene, Aaron goes around to warn his fellow employees that Chase may be a threat and they all prepare, but the online webcast proceeds as planned.

With the camera on him during the live moment of silence, Chase stands up and reaches in his pocket. The employees all shoot in what they believe is self-defense. It is then revealed that Chase was reaching for a picture of his dead daughter. In the final seconds of the episode, Aaron goes to turn off the live camera focused on Chase's dead body, then thinks better of it and leaves it on.

In his own way, Chase took out the gun lobby headquarters without firing a shot and the hope is the entire enterprise will go crumbling in the wake of the unnecessary on-air death, just as he said to Trish earlier. And just as Hollywood liberals wish would happen in real life.