The ‘tolerance for me, but not for thee’ crowd is at it again. This time, the target is not the State of North Carolina. According to Sports Illustrated, this time the Rainbow Jihad has trained its sights on the Mormons: 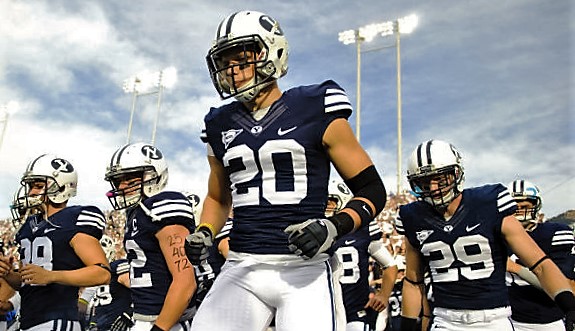 “A coalition of national LGBT advocacy groups is urging the Big 12 not to admit BYU as a new member, FOX Sports has learned.

On Monday, Athlete Ally, a non-profit that conducts LGBT awareness campaigns for sports leagues, and the National Center for Lesbian Rights, sent a letter to Big 12 administrators detailing what they believe are discriminatory policies by BYU, a religious institution owned by The Church of Jesus Christ of Latter-Day Saints.

In the letter addressed to commissioner Bob Bowlsby, the authors write in part: “BYU … actively and openly discriminates against its LGBT students and staff. It provides no protections for LGBT students … Given BYU’s homophobic, biphobic and transphobic policies and practices, BYU should not be rewarded with Big 12 membership.”

The letter is co-signed by 23 other national and regional advocacy groups, including GLAAD and National Organization for Women (NOW). In addition to Bowlsby, the conference’s 10 university presidents, athletic directors and other administrators were expected to be copied.

BYU students and faculty are expected to follow the school’s Honor Code, which includes a section addressing “Homosexual Behavior.” While “same-gender attraction” is not itself an Honor Code violation, taking part in a same-sex relationship is.

It’s worth noting, that while BYU opposes homosexuality on moral grounds, it also opposes premarital heterosexual sex on moral grounds. Which comprises about 99.8% of all sex on college campuses. To the extent that many students, some even prominent athletes, have been suspended or expelled because of it.

Also, BYU’s Honor Code in no way extends to visiting coaches, students, and/or players. Meaning, the Transgender Vegan Muslim Druid Student Association of Oklahoma will in no way be endangered when the Sooners play the Cougars.