The Dallas Cowboys won the first weekend of training camp by showing support for the Dallas PD. Specifically, wearing an “Arm in Arm” decal on the side of their helmets, in a show of solidarity with the police in the aftermath of the senseless murder of 5 Dallas police officers in July.

Nothing controversial about that, right? Wrong.

At least according to Mike Florio at Pro Football Talk. Who, when discussing whether the team will wear the decal during the regular season, expressed a view of the Cowboys support for the police that he believes sets it apart from other causes adopted by the NFL: 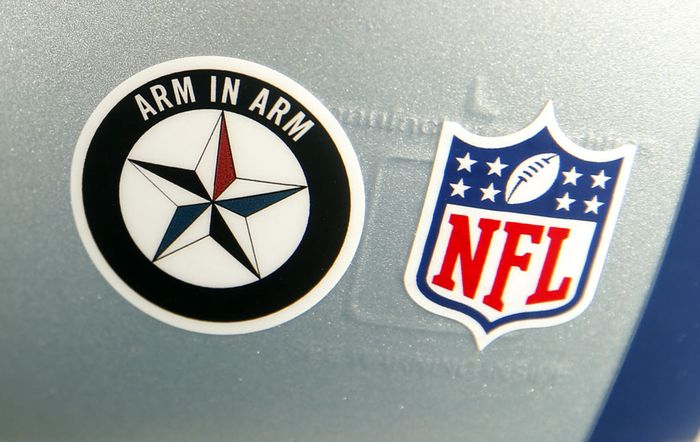 “After the Cowboys debuted the “Arm in Arm” helmet decal as a show of support for the Dallas police department, a team spokesman told PFT that the hope was to wear the sticker during preseason and regular-season games. The Cowboys apparently have since realized that the NFL won’t allow the uniform deviation once the season begins in September.

“Well, I don’t think we’ll be able to do it during the regular [season],” Cowboys COO Stephen Jones told David Moore of the Dallas Morning News. “It’s up for debate as to whether we can wear them in the preseason games.”

PFT asked the league office on Sunday via email for clarification regarding the situation. The league did not respond. But Jones accurately summarized the league’s likely officially sentiment.

“There are so many wonderful, wonderful causes, the league has to be careful,” Jones said, via Moore. “If you allow one, then what do you do about every team that has a great reason to have something on their helmets? There are tons of things out there that need to be recognized. Once you open that Pandora’s box, how do you ever stop?”

The unofficial reality? Pandora’s box already has been opened, with the infiltration of pink in October for breast cancer awareness and camouflage in November for military appreciation. But those causes aren’t controversial — and they are more conducive to the generation of merchandising dollars.

That’s pretty intensely controversial to at least half the country.

But how in the world are the Cowboys efforts controversial? A program to support a police department who had 5 officers slain while in the act of committing the extrajudicial offense of policing a protest? What is controversial about that?

Florio is right that the league will probably not allow the Cowboys to wear the “Arm in Arm” decal in the regular season. But, the idea that they wouldn’t do it because it was “controversial,” is repulsive.