USA Today totally respects and acknowledges your right to freedom of religion. Until it doesn’t.

At least that seems to be what they’re getting at in an article titled, “When Religion and the LGBT Collegiate Athlete Collide.”

The piece starts off harmless enough. Writers Erik Brady and Scott Gleason tell the tale of Connor Griffin, a gay athlete at Fordham University who has apparently found nothing but total acceptance from his school and his teammates. Despite the fact he competes at a Catholic school.

Then, this quote from Griffin leads the piece down a dark and twisted road: 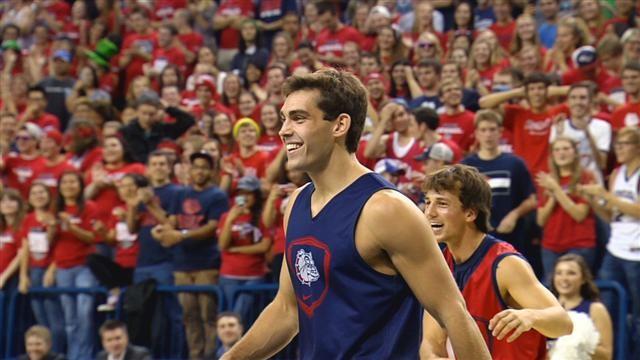 "People want to tell me I’m brave,” Griffin tells USA TODAY Sports. “Coming out as gay isn’t brave, or shouldn’t be. I was born this way. I didn’t choose it. People choose to enlist in the Army. That’s brave. Coming out should just be normal and not a big deal.”

Except that it is a big deal at many religiously affiliated colleges that see homosexuality as a sin — and that have codes of conduct banning same-sex relations. Freedom of religion allows such schools to operate under their own precepts and beliefs, but gay rights advocates say that doesn’t mean the NCAA must allow membership to schools that enforce these kinds of codes.

"The association is this fascinating, complex entity that has universities and colleges that cover the political spectrum, many of which have religious affiliations,” NCAA president Mark Emmert says. “The association entrusts its board of governors, a group of mostly university presidents, to establish the core principles and values by which they want to conduct college sports”…

“…Freedom of religion is an American value. So is freedom from discrimination. These values clash in so-called religious freedom laws in states such as North Carolina and Mississippi. The same tensions in the broader culture are also found in NCAA core values: One promises “an inclusive culture that fosters equitable participation” for all athletes — and another “respect for institutional and philosophical differences.” The question is how the NCAA balances these values when they conflict.”

Freedom of Religion, and the exercise thereof, is not merely an American value. It’s a right under the Constitution of the United States. In fact, it was considered such an important right that it was made a part of the very 1st Amendment in the Bill of Rights.

Conversely, nowhere in the Bill of Rights will you find any mention of “freedom from discrimination.” So, in the debate, which principle has more primacy: Freedom of Religion? Or Freedom from Discrimination?

Well, there is no debate.

The article goes on:

“NCAA director of inclusion Amy Wilson says her organization respects the differing views of its diverse membership while also working with them to promote respect for all athletes. “If an issue arises, we don’t call a school and say, ‘Hey, change your policy,’ ” she says. “We will call a school and try to have an open dialogue.”

That’s not good enough for Cyd Zeigler, co-founder of Outsports.com. “The NCAA wouldn’t tolerate a no-blacks, racist policy,” he says, “but it has no problem tolerating a homophobic policy.”

But that wasn’t all:

“The Education Department said in 2014 that transgender students are protected by Title IX. Since, dozens of religious schools — mostly smaller and lesser known, and none of the schools mentioned in this story — have asked for waivers that allow them to deny admittance to transgender students. And that has turned into a flashpoint for the NCAA.

Recently more than 80 LGBT organizations wrote a letter to the NCAA urging it to divest membership of religiously affiliated schools that ask for such waivers. “These requests,” the letter said, “are directly in conflict with the NCAA’s longstanding commitment to diversity and inclusion for all people regardless of sexual orientation and gender identity.”

Last month, the NCAA wrote a return letter noting that it plays no role in making waiver decisions or in telling schools whom they should admit. “Our diverse membership comprising over 1,100 schools all serve to educate students while also preserving institutional values,” the letter says, adding it is up to students “to evaluate multiple schools to find one that best meets their needs.”

That sounds a lot like telling transgender students just to choose other schools. Or, in the case of sexual orientation: If you’re gay, stay away.”

Yes, that’s the beauty of having freedom of choice. You can be rejected at one place and find a just as good, if not better opportunity somewhere else. That’s your right.

What isn’t your right, is depriving academic institutions of their ability to govern and operate their universities, consistent with a set of core religious beliefs.

And why would you want to? The only reason why an openly gay athlete would select a school morally opposed to homosexuality, is if the athlete was an activist, or an idiot.

And trouble-makers, and idiots, should automatically be excluded from any sports team on general principle.