Just ask Caitlyn “Don’t You Dare Call Her Bruce” Jenner, who recorded a video message with U.S. Ambassador to the United Nations Samantha Power on Human Rights Day. In the video, Jenner was commended by Powers for his/her work in the fight for LGBT rights: 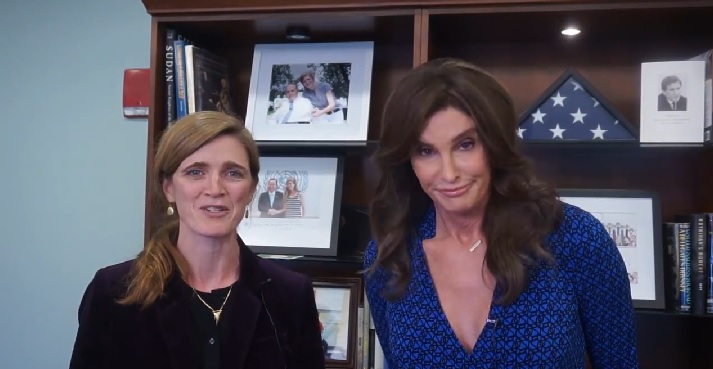 “Today is International Human Rights Day. At the United Nations, we’re working to integrate LGBT rights into every discussion on human rights, but there is still so much more we can do so that everyone has the freedom to live as they are without fear. It was good to talk to Caitlyn Jenner recently about the important work we can do at home, at the UN, and internationally. Around the world – and here in the US – transgender people face bullying, abuse, and even fatal violence simply for who they are. The threat is all too real for too many: from 2008-2014, over 1,600 transgender people were killed worldwide.”

Except Ambassador Powers could have saved her breath, because soon after that meeting, LGBT website Towleroad ran a story with the headline:

The rest of the article wasn’t nice to Jenner either. Commenting on the video, the article states:

“Oddly, Jenner suggests that she’s “comfortable” with the issues here in the U.S., a remark that won’t sit well with trans activists here who have called her “an insult to trans women” and claim that because of her privilege, wealth and fame she is out of touch with the discrimination, poverty, and marginalization issues faced by transgender women day to day. Her remarks also discount the violence that occurs domestically against trans women; at least 21 murders have been documented in the U.S. this year.”

Complete with quotes from others as well. Like Cosmopolitan’s Alex Rees:

“Caitlyn continues with the lazy stereotype of “a man in a dress” making people uncomfortable specifically, this being a long-standing slur thrown at trans women. Newsflash: there’s nothing wrong with a man wearing a dress, whether it’s as part of a transition or just because he would like some fresh air on his balls once in a while — but in certain contexts, the label is hurtful. And Caitlyn is a woman who has dealt with, just to pick one example, paparazzi shooting zoom lens photos of her wearing women’s clothing (this in the weeks prior to her tell-all interview with Diane Sawyer), solely for the purpose of furthering the “man in a dress” narrative in all its clickbait newsstand glory; she notes earlier in the Q&A that, throughout this period, she was “getting destroyed in the rags.” It’s incredible, then, to hear such thoughtless criticism, borderline bigotry, really, from a woman who surely knows how wrong such terminology is. That she’s somehow internalized the slur is unfortunate (but not uncommon among minority communities facing prejudice); that she’s now projecting it upon the trans community at large is unacceptable.”

Hmm, I’m going to guess that Jenner continues the “lazy stereotype” of “a man in a dress,” because he has a penis and wears a dress. Just my two cents.

But of course, there was the kicker at the end:

“Of course, along with claiming that she advocates for the trans community, Jenner has said she still plans to vote for the anti-LGBT Republican Party in 2016 despite a slate of candidates who have been vocal and expressive about their opposition to LGBT issues in recent months on the campaign trail.”

I’m so glad the LGBT cause is all about acceptance and tolerance no matter who you are. Can you imagine how ugly it might get if it was corrupted by politics?