The No Fun League apparently isn’t merely confined to the N.F.L. On NBC’s Sunday Night Football, Al Michaels made a joke about taxes (you can watch the video on Deadspin here). In the video, Michaels talked about how Bill Belichick made a paltry $25 dollars a week while coaching for the Baltimore Colts in 1975. 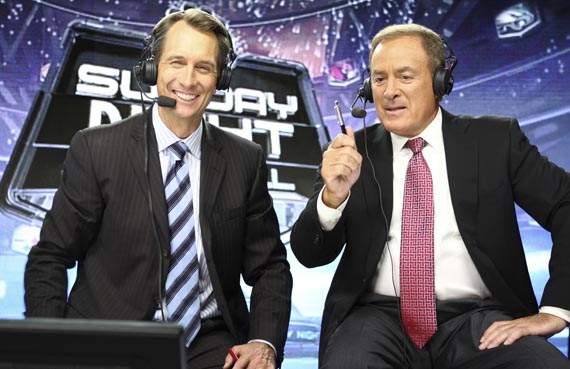 Cris Collinsworth: $22 after taxes, he told us

Al Michaels: Today would be about $8

Al Michaels: What can I tell you?

Clearly, though Al Michaels is known to lean right, this was a good-natured joke. But because his joke was made at the expense of what liberals believe is their “inalienable right,” which is to tax and spend your income, Deadspin helped launch the hissy-fit parade by not only writing in-depth, but also including a chart with marginal tax rates:

Al Michaels is one of sports broadcasting’s best-known conservatives, and the NBC announcer cracked wise with one of the right’s most classic myths: that income taxes these days are extraordinarily high.

“That’d be $8 today,” Michaels muttered about Bill Belichick’s first job, making $25 a week for the Colts—“$22 after taxes he told us,” partner Cris Collinsworth replied. The truth:

Al Michaels just made a joke implying income taxes are higher than they were in 1975. In fact, they are much lower. pic.twitter.com/hGDhn1Inbk

Okay, you want truth? That joke was worth a laugh if you’re a conservative, a snicker if you’re a liberal and nothing more. Certainly not the well over 200 words, complete with video and chart that Deadspin spent on it.

Sigh…yes. Deadspin is correct, that the marginal tax rate is lower today than it was in 1975. No thanks at all to Deadspin and their liberal brethren, but what they miss completely is that Michaels actually grossly understates what his tax rate would be on $25. For the government share of your $25 bucks to be $8 dollars, the tax rate would have to be just under 33.3%. However, with a top marginal tax rate of 39.6, in addition to a California top marginal rate of 13.3, Michaels is essentially paying 53% of his income in taxes.

While $25 bucks certainly doesn’t qualify you as “top bracket,” if you take Michaels reported salary of $5 million dollars a year, that means Al Michaels is paying somewhere north of $2.6 million dollars to state and federal governments.

Or, put differently, Al Michaels by himself paying back exactly what liberal icon Al Sharpton owed the federal government in back taxes in 2012. Not including $900,000 in state taxes, and $880,000 in taxes owed by his National Action Network.

But hey, a conservative made a joke about taxes. So, let’s have a cow about it.