Conservative representation in entertainment merits mudslinging, according to the liberal media.

At least, that’s the impression an AM Joy panel gave. In a discussion on April 1 over the new ABC reboot of Roseanne, three guests – including actor and director Rob Reiner – and host Joy Reid levied harsh judgment of the show. The actor and director more commonly known as “Meathead” decided that the problem with Roseanne Barr, a real-life Trump supporter, is that she and her character are too similar. 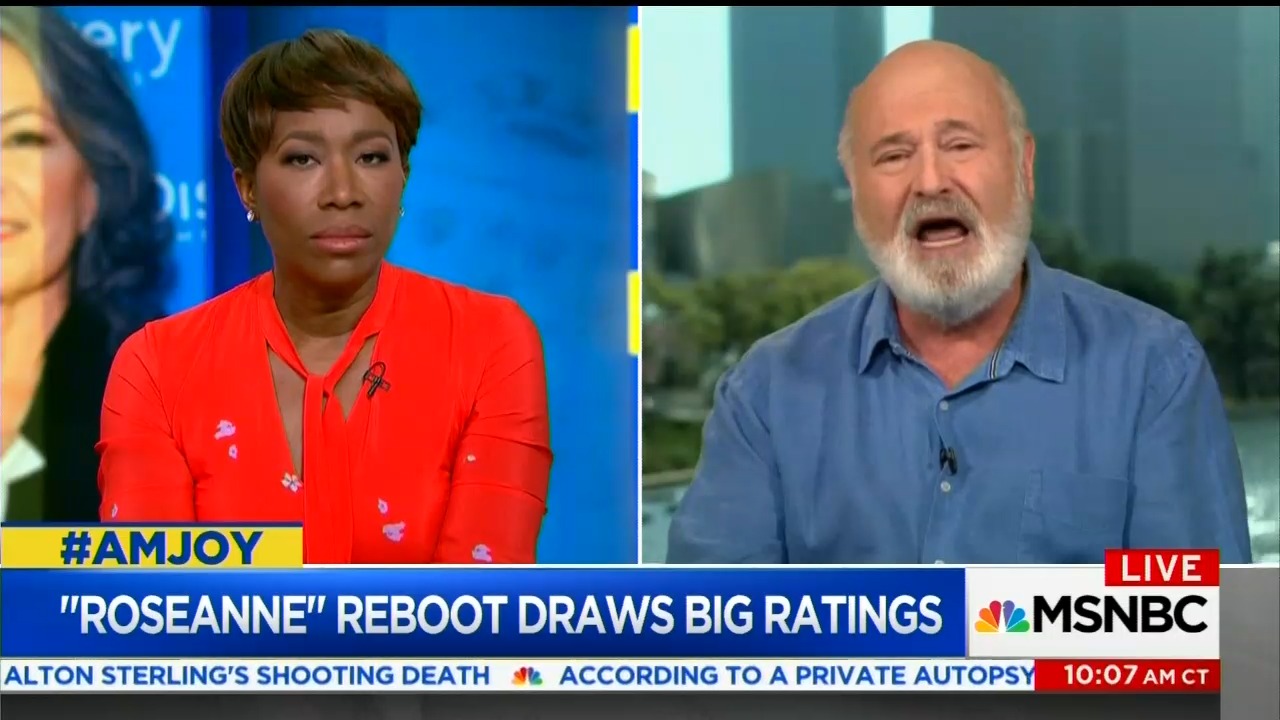 He said, “Audiences have a hard time distinguishing between a character on television and something they see in real life. This blurs that line, eliminates that line.”

In All in the Family, Reiner himself played a die-hard liberal who fought frequently with the conservative character, Archie Bunker. Since then, Reiner as an activist has imitated the opinions his character possessed on the show. However, he doesn’t seem to see the hypocrisy.

Another member of the panel, civil rights activist Maya Wiley, summed up what she thought was the key impetus behind the show’s reboot: racism.

“One aspect of Trumpism that this really underscores is fear and insecurity of a rapidly changing world, one that is changing demographically,” she began. “There’s not going to be one racial majority in this country very, very soon. Demography is not destiny. It doesn’t mean we’ll have a fully fair world. But the point is, that kind of insecurity is feeding and driving this very deep, divisive, very scary alt-right world that is a zero fact zone.”

After warning about “truthful journalists” becoming “diminished,” Reiner decided to pontificate on Wiley’s point and followed up her statement with a stale, recycled point of his own:

“It goes back to the original sin of this country which is slavery, and we are fighting this last battle of the civil war. And those people who are the alt right, the white supremacists are hanging on for dear life, and they’re using these propaganda tools which are not just, like I say, lunatic fringe. They’re now invading us, and you guys in the mainstream media seeking the truth are really fighting an uphill battle. This is a real battle right here for the soul of democracy.”

Barr has not identified as alt-right publicly, nor is her show meant to appeal to racists. Why Reiner brought the alt-right into his arguments is anyone’s guess.

At the beginning, Reid introduced Roseanne to the panel with the comment, “I didn’t find [the show] all that funny necessarily.” And she ended the segment with a biting statement about Roseanne Barr: “She will be a very difficult person to keep under wraps and to silence. They’ll have a challenge on their hands apparently for two seasons.”

MSNBC contributor Gabriel Sherman tried to explain the show’s appeal to the rest of the panel, saying it was the same as The New York Times giving a profile to a white supremacist.

“I think this sort of obsessing over who these people are misses the fact that Donald Trump is president … that is irrelevant to the underlying politics here,” he said.

Later, Sherman stated that it was time to start ignoring the conservative audiences in the entertainment industry.

“You forget trying to understand them,” he added. “This is a shrinking part of the population with retrograde views and we should focus on how to move the country forward.”